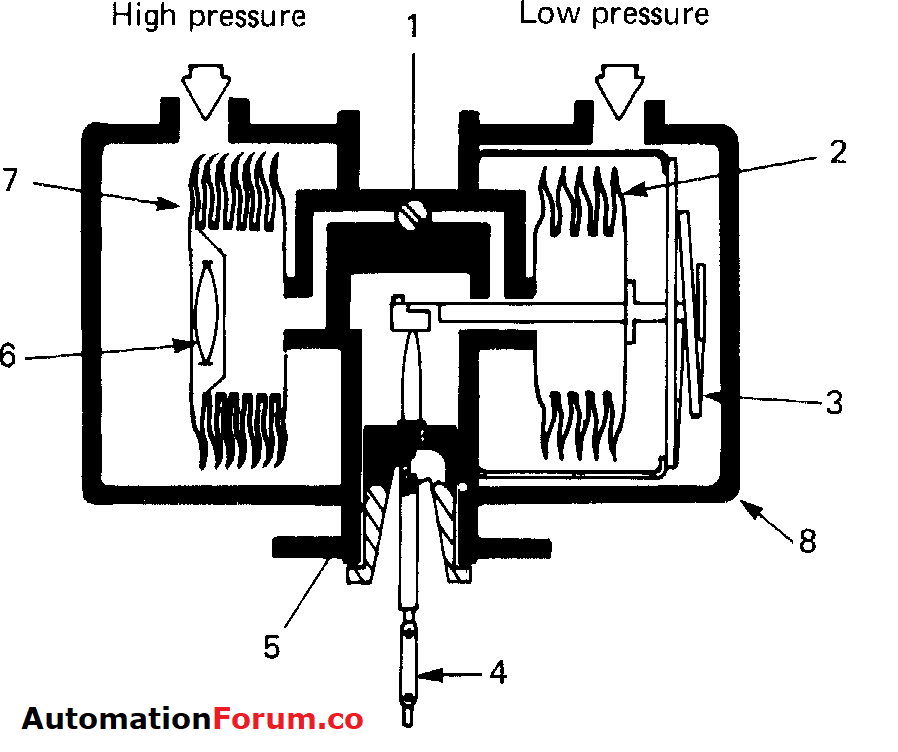 The simplest form of diaphragm gauge is the Schaffer gauge, shown in above figure.

It consists of a corrugated diaphragm of about 65 mm in diameter heat treated stainless steel and held between two flanges. The unknown pressure is applied to the diaphragm’s underside and the resulting movement of the diaphragm’s centre is transmitted through a connection to drive the pointer

A corrugated diaphragm is also used by an aneroid barometer, but it is supplemented by a spring.

The element is a flat, circular capsule with a corrugated lid and base and is evacuated prior to sealing. A spring anchored to a bridge and attached to the capsule’s top centre prevents it from collapsing. A lever which acts through a bell crank-and-lever mechanism to rotate the pointer is also attached at this point.

The capsule contracts when the atmospheric pressure rises, causing the pointer to rotate in one direction.

The capsule expands when the atmospheric pressure drops and the pointer is driven in the opposite direction.

The diaphragm elements (7) and (2) consist of pairs of corrugated diaphragms welded at the central hole with a spacing ring stitch. At their circumference, these assemblies are then stitch-welded to form a stack.

Together with the range spring (3) and drive unit (4), the diaphragm stacks (7) and (2) are mounted on the central body. The high-end low-pressure chambers are formed by pressure-tight covers (8). The diaphragm stacks (2) and (7) are interconnected via the damping valve (1) and fitted with a fluid internally under normal ambient conditions.

An increase in pressure in the high-pressure chamber compresses the diaphragm stack (7), thereby displacing fluid into the stack (2) via the damping valve (1), causing it to expand until the force exerted by the range spring balances the initial pressure change.

The deflection of the range spring is transmitted to the drive unit’s inner end, which, pivoting at a sealed flexure (5), transfers the motion to the drive shaft’s outer end (4), where it can be used to operate a pen arm.