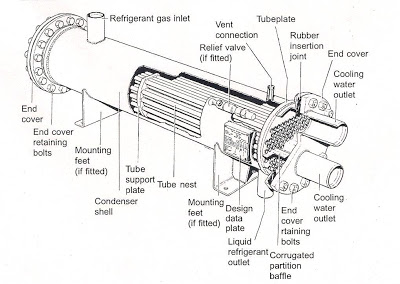 What is a Condenser?

The heat that will be absorbed is then removed from heat from having to be removed from the refrigerant-derived gas. from:

Function of a Condenser:

A condenser is a device that functions to condense steam which converts the turbine to be used as water for the next cycle. The condenser consists of a small tube which is transverse. In this tube the cooling water from the sea is flowed. leave. While steam flows from top to bottom to experience condensation or condensation. Up to the bottom, water will be accommodated in a tub called Hotwell. Before entering the condenser, sea water usually passes through the debris filter which serves to filter out dirt or mud impurities carried by sea water. In order for steam to move down from the Turbine’s last knife, the condenser vacuum must be maintained.

Condensate Pump: The pump is to pump condensate water from the reservoir (Hotwell) to the filling water tank.

Cooling Water Pump: The pump is to pump water into the condenser and another cooling lat that is pumped from the river, sea or reservoir for units that use closed cooling.

Tube: Place the flow of lut water as cooling water and is the place where the heat transfer process between steam and cooling water occurs (sea water).

Hot well: A place for collecting water from condensation.

How does the condenser work?

The workings of the condenser are as heat exchangers, namely the heat transfer process between two objects separated by a solid wall. The heat contained in steam is removed by transferring to sea water used as a cooling water.

What is a surge tank?