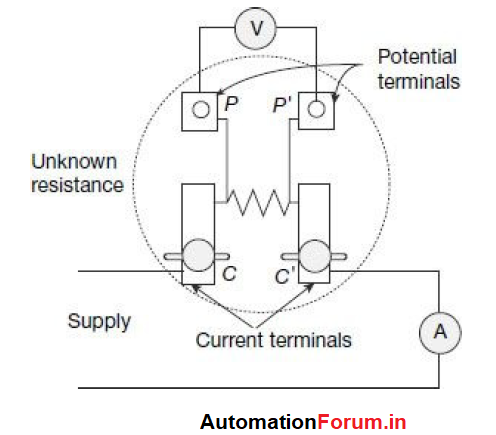 This method, due to its simplicity, is very commonly used for measurement of low resistances when accuracy of the order of 1% is sufficient. The resistance elements, to be used for such measurements, however, need to of special construction. Low resistances are constructed with four terminals as shown in:

Contact drop at the potential terminals PP’ are, however, less itself, since the currents passing through these contacts are extremely small (even zero under ‘null’ balance condition) owing to high resistance involved in the potential circuit.

Value of the unknown resistance RX, in this case, is given by: Voltmeter reading/ ammeter reading

Kelvin’s double-bridge method is one of the best available methods for measurement of low resistance. It is actually a modification of the Wheatstone bridge in which the errors due to contacts and lead resistances can be eliminated.

Kelvin’s double bridge incorporates the idea of the second set of ratio arms, namely, p and q, and hence the name ‘double bridge. The underbalanced condition, potentials at the nodes a and b must be equal in order that the galvanometer G gives “null” deflection. Since at balance, no current flows through the galvanometer, it can be considered to be open circuited.

Thus, with the switch in position 1-1’, the potentiometer reading is the voltage drop across the unknown resistance, given by Vx= I*X

What is an automatic voltage regulator?