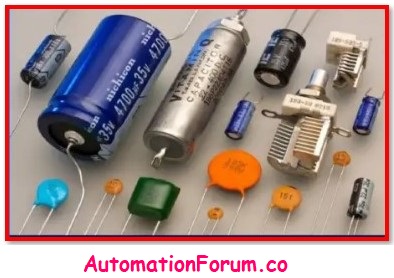 What is a Capacitor?

A Capacitor is a type of electronic device that consists of two electrically conducting plates that are spaced apart by an insulator. Based on the capacitor’s capacity to store and discharge current, it is utilised in electrical applications and circuits that use both direct current (DC) and alternating current (AC) to produce certain effects.

There are generally just two fundamental types of capacitors as far as electricity is concerned:

Capacitors are classified in a variety of ways as it relates to building design and materials used in production.

In AC circuits, the alternating current alternately charges the capacitor in one direction and the other at regular intervals. The capacitor output current switches in phase with the AC voltage when the plates discharge during the direction change. Capacitors are said to “pass” AC in this method.

The supply voltage changes more quickly in a positive direction at 0° (the angle between the current and the voltage), which can lead to the maximum charging current. The supply voltage has no increase (or reduction) when the applied voltage reaches its peak value at 90°. There would therefore be no current flowing across the circuit. The voltage slope turns negative when the applied voltage approaches zero at an angle of 180 degrees, causing the capacitor to discharge fully in the opposite direction. Greatest current flows at the 180° point along the line, where the voltage change rate reaches its maximum value. The cycle then continues from that point on. As a result, with AC-capacitors, the minimum current occurs when the applied voltage is at its highest, and vice versa. As a result, the current leads the voltage by 90 degrees (or 1/4 cycle). Capacitor thus 90° delays current.

Where, it refers to the capacitor’s capacitance rating. Microfarad (MF), Nano Farad (nF), and Farad (F) values are available for ac capacitors.

Energy is stored as capacitance between the electrically isolated two plates of a capacitor. The capacitor will charge to the level of the applied voltage when DC current is applied to a circuit that just contains resistance and capacitance. Once the capacitor is fully charged, there is no further current flow because DC only flows in one direction. Capacitors are able to “block” DC current flow according to its property.

The following points will helps understand how a capacitor behaves in a DC circuit:

Difference Between the AC and DC capacitor:

What is meant by High Rupturing Capacity (HRC) Fuse?

What is optical pyrometer?

What is proactive maintenance?