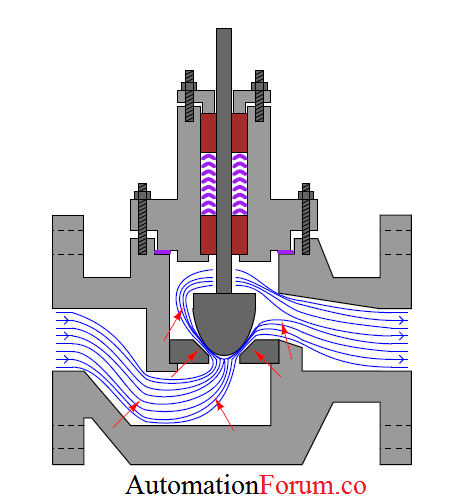 Valve vary the flow of fluid through it by means of the change of pressure to the valve top. The relation between valve stem position and flow through the valve is known as valve characteristics.

The amount of fluid passing through a valve at any time depends upon the opening between the plug and seat. Hence there is a relationship between stem position, plug position and the rate of flow, which is described in terms of flow characteristics of a valve. The two types of valve characteristics are inherent and installed flow characteristics.

The inherent flow characteristic of the control valve is the relationship between the flow and travel of the valve to a constant pressure drop across the valve.

Valves of any size or inherent flow characteristic which are subjected to the same volumetric flow rate and differential pressure will have exactly the same orifice pass area. However, different valve characteristics will give different ‘valve openings’ for the same pass area.

These valves have a valve plug shaped so that each increase in valve lift increases the flow rate in a certain percentage of the previous flow. The relationship between the elevation of the valve and the size of the hole (and, therefore, the flow) is not linear but logarithmic.

The valve plug characteristic of quick opening will give a large change in the flow rate for a small valve lift from the closed position. For example, a 50% valve lift can result in an orifice passage area and a flow rate of up to 90% of its maximum potential.

Quick opening valves tend to be electrically or pneumatically driven and used for on / off control. The type of automatic action control valve tends to have a plug shape similar to the quick opening plug.

Each application will have a unique installation feature that relates the fluid flow to the heat demand. The pressure differential across the valve that controls the flow of the heating fluid can also vary:

The characteristic of the control valve chosen for an application should result in a direct relationship between valve opening and flow, over as much of the travel of the valve as possible.