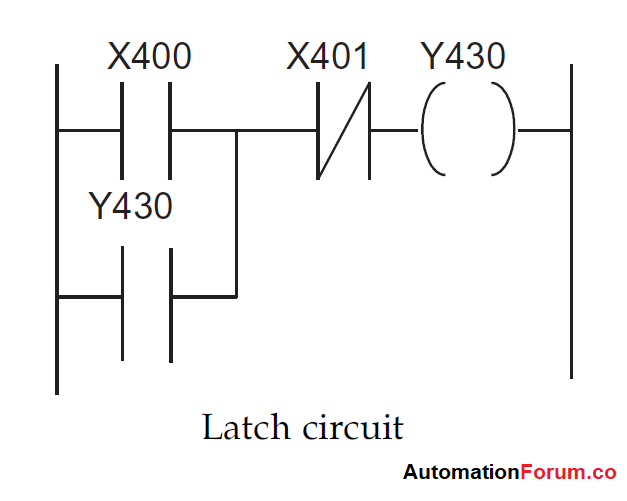 The latch is to hold an output energised, even when the input stopped. There is the necessity of such a situation in industries.

For example, a motor which is started by pressing a push button switch. Though the switch contacts do not remain closed, the motor is required to continue running until a stop pushbutton switch is pressed.

When the contacts of the input X400 close, the output is Y430. However, another set of contacts | | Y430 associated with the output closes when there is an output.

These contacts form an OR logic gate system with the input contacts. Thus, even if the input X400 opens, the circuit will still maintain the output energised. The only way to release the output is by operating the normally closed contact.

Consider a stop-and-start button switch controlled engine for which one signal light has to be illuminated when the power is applied to the engine and another when it is not applied.

When X400 is momentarily closed, it energizes Y430 and closes its contacts. This results in Y431 being latched and switched off as well as Y432 being switched on.

X401 is pressed and opened to switch off the engine. In the top rung and third rung, Y430 contacts open but close in the second rung. Thus Y431 comes on and Y432 off.

What is the purpose of Gateway, Bridges & Routers in networks?