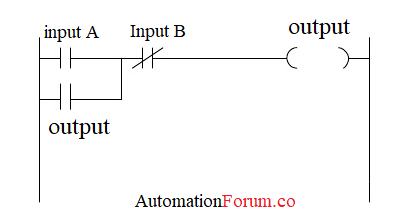 The latching is used where the output must be activated even after the entry ceases.

A simple example of such a situation is a motor, which is started by pressing a button switch. Although the switch contacts do not remain closed, it is required that the motor continue to run until a stop button switch is pressed. The latching used to stay the motor run until the push button is pressed again.

Circuits that are characteristic given the previous conditions are often needed in logic control. In this series the output is latched by using the output contact itself, so even though the input has changed, the output condition is fixed:

When there is an exit, another set of contacts associated with the exit is closed. These contacts form an OR logic gate system with the input contacts. Therefore, even if the A input is opened, the circuit will keep the output energized. The only way to release the output is to activate the normally closed contact B.

As an illustration of the application of a holding circuit, consider a motor controlled by the stop and start button switches and for which a signal light should be turned on when power is applied to the motor and another when it is not applied. The following figure shows the ladder diagram with Mitsubishi notation for directions.

What is PLC scan and it’s working

What are the major PLC hardware components?