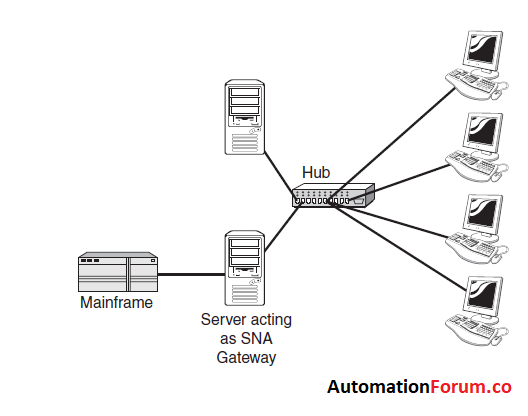 Gateways, Bridges & Routers are the interconnecting devices in a network topology.

There are three, commonly used devices which perform the role of the internetwork interface between OSI systems:

Gateway is the most complex interconnected system, which is designed to translate all seven layers from the protocol of one network to the seven layers required by another network.

Gateway connection can provide a connection between a computer on ethernet connection and PLC network, which are in two kinds of network protocol.

A router is a common type of gateway, placed where two or more networks meet, including at each Internet point of contact.

If the upper layers (4, 5, 6 and 7) of two, OSI networks are the same, then protocol translation for the lower 3 layers can be performed using a “Router.” Routers can be used at a popular stage to link a amount of such networks.

Bridges document traffic information and then use it to determine the simplest route to transferring data without sending it to any PC.

The most easily interconnected OSI networks are those that are entirely identical or those that vary only in the one or two levels below. A bridge can be used in these situations to interconnect the systems.

The physical and data link layers of the OSI model are the ones which are most closely related to environmental factors. As a corollary, it is, therefore, logical to attempt to achieve common, upper layer standards for the OSI model, whilst varying the lower 2 layers to suit different user requirements.

What is Latch? How does a Latching work in PLC program?