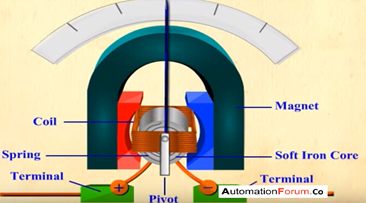 What is an electrical measuring instrument

Electrical instruments are instruments that use the mechanical movement of electromagnetic meter to measure voltage, power, current… Electrical technicians require electrical measurement equipment to check the electrical activity and to detect the presence of voltage or current. By using this instrument we can measure electrical parameters such as voltage, frequency, current, power factor, and resistance. Electrical measurements are depended upon either current or voltage while measuring the frequency we will be measuring the frequency of a current signal or a voltage signal.

An ammeter is an instrument which is used to measure the electric current in amperes in a branch of an electric circuit. In order to measure the current it must flow through the ammeter, so the ammeter must be placed in series with the measured branch and it must have very low resistance so that the alteration of the current can be avoided which is measured. Instruments which is used to measure smaller currents are micro-ammeter. The ammeter is connected in series to the device which is to be measured because objects in series have the same current.

In a moving iron, ammeter can measure the AC and DC, it has an iron piece instead of the spring and pointer system of the galvanometer. The iron will act by the magnetic field created in the coil.

Galvanometer was the first type of ammeter, it is used to detect and measure electric current. It is an analog electromechanical transducer which makes a rotary deflection in response to the electric current flowing through the coil. A galvanometer can read direct current flow, the magnetic field created as current flows through a coil acts on a spring, which will move the needle indicator.

A shunt can be used in ammeters to measure large currents, shunt acts as a resistor the known quantity of resistance is used to obtain an accurate reading. Digital ammeters use analog to digital converter to measure the current across the shunt.

Digital voltmeters can measure the AC and DC voltages and it displays the result in converted digital form with decimal point and polarity. It can provide accurate details about the current draw and current continuity and this will help the users to troubleshoot erratic loads.

What are the advantages of digital voltmeter

These voltmeters are instruments that can accurately measure the voltage without any charge transfer. Whereas conventional voltmeter needs charge transfer to the voltmeter and it will lead to loading and adjustment of the source voltage. The main advantage of an electrostatic voltmeter is that it can do the surface potential measurement on any type of material without any physical contact.

What is Flow Injection Analysis (FIA)?

What is LO or LC in valves?