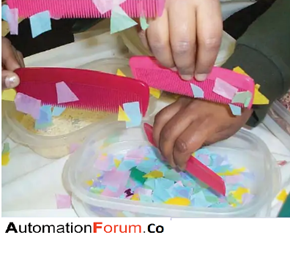 What is Static Electricity

Static electricity is an electrical charge that is at rest, which is opposite to electrical charge that is in motion it is called static electricity because the charges don’t move. It can also result from the removal of the electrons from the atoms of one material and absorption of these electrons on the second material and this will take place during the physical separation of two materials. Both materials could remain charged if they are well insulated electrically. Static charge can be generated either by friction or by induction. In general static electricity can be created by a buildup of electrons. Static cling and lightning are two examples that are caused by static electricity. Static electricity is generated by the contact and separation of materials, when the surface electrons of a material are disturbed then an imbalance of negative and positive charge could arise between the interacting surface and the result will be static electricity. Due to the surface disturbance static charge can be caused it can happen in several ways and they are all involved in some kind of movement

What are some examples of static Electricity

The most common method of generating static charge is the triboelectric charge or the friction electricity developed when rubbing together and separating two masses. Static electricity can also be generated by the process which involves flammable liquid. Static electricity is generated by liquid flowing through pipes and in mixing, pouring, pumping, filtering or agitating solids or liquids. It could also have resulted from the induction

Some pharm manufacturing companies have some operations which will generate static electricity they are liquid handling systems, solvent dispensing, Vibro-sifters, powder transmission, mixing and processing reactors. Solvent dispensing various process includes the transportation of liquids from one process to other or solvent storage yard and dispensing of the same as and when is the major area where the static current could cause an explosion. Static charge accumulation is a function of the resistance of the path by which charges dissipate within a liquid and the dissipation of the static energy is depended on the liquid property which is conductivity some liquids which are flammable have very low conductivity and it will accumulate static charges.

What are the common sources of static electricity

Pulverized material passing through chutes or pneumatic conveyors an example for this is catalyst conveyer. Steam, air or gas flowing from any opening in pipe or hose when steam is wet or the gas or air contains particulate matter, non-conductive power transmission belts or conveyor belts in motion and all sorts of motion which involve changing in the relative position of contacting surfaces, the flow of hydrocarbons through micro-filters made of paper.

What are the major problems and hazards caused by static electricity

The major hazard which could cause by the static electricity is the possible ignition of the flammable vapors and powders and other problems include electric shocks to the humans and some measuring instruments could show false reading where static is present. They can also cause industrial problems such as unwanted adhesion or repulsion of sheet paper in the printing industry and integrated circuits could be damaged by the presence of static voltage. Static electricity is the major cause of fires and explosion in many industries

What are the methods for static control

Generation of static electricity cannot be eliminated its generation and accumulation rate can be reduced. In a piping system if the pipe size must be proper to reduce liquid velocity. This can be done for the piping system in general static electricity can be reduced by reducing the charge, by increasing the surface conduction power, by making the fiber hydrophilic. They can be reduced by the use of conductive materials conductive liquids can be used, use of plastic bags can be avoided, conductive pipes can be used. Avoid explosive mixture formation explosive dust and vapors can be removed by the use of vacuum suction devices inert atmosphere can be maintained by nitrogen or other inert gas and nitrogen pressure can be used for charging flammable materials