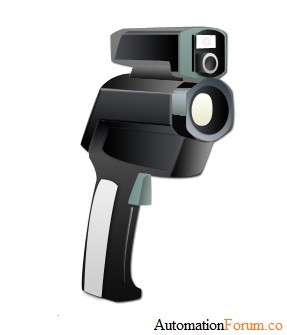 Why to use Pyrometers or non-contacting type?

All objects emit electromagnetic radiation as a function of their temperature above absolute zero, and radiation thermometers (also known as radiation pyrometers) measure this radiation in order to calculate the temperature of the object. The total rate of radiation emission per second is given by

There are mainly two types of pyrometers:

The optical pyrometer is designed to measure temperatures, where the peak radiation emission is in the red part of the visible spectrum, i.e. where the measured body glows a certain shade of red according to the temperature. This limits the instrument to measuring temperatures above 600°C.

The instrument contains a heated tungsten filament within its optical system. The current in the filament is
increased until its colour is the same as the hot body: under these conditions the filament apparently disappears when viewed against the background of the hot body. Temperature measurement is therefore obtained in terms of the current flowing in the filament.

Radiation pyrometer described below have an optical system that is similar to that in the optical pyrometer and focuses the energy emitted from the measured body. However, they differ by omitting the filament and eyepiece and having instead an energy detector in the same focal plane as the eyepiece:

The size of objects measured by a radiation pyrometer is limited by the optical resolution, which is defined as the ratio of target size to distance. A good ratio is 1:300, and this would allow temperature measurement of a 1mm sized object at a range of 300 mm. With large distance/target size ratios, accurate aiming and focusing of the pyrometer at the target are essential.

It is now common to find ‘through the lens’ viewing provided in pyrometers, using a principle similar to SLR camera technology as focusing and orientating the instrument for visible light automatically focuses it for infrared light.

Working of an Override Control