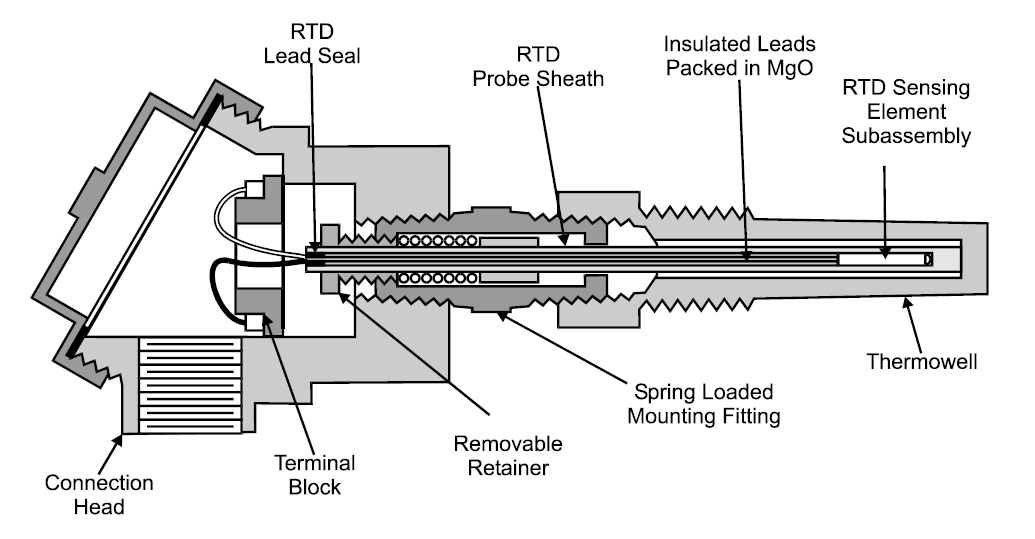 Resistance Temperature Detectors (RTD) are temperature measuring transducers used in industrial applications. RTDs are simple in construction with higher accuracy and repeatability and which are used in the applications below 600°C.

The electrical resistance of which changes with temperature as approximated by the following formula:

RT= Resistance of RTD at given temperature T (ohms).

Rref = Resistance of RTD at the reference temperature Tref (ohms)

The magnitude of the temperature coefficient determines the sensitivity of the RTD, it depends on the metal used in the RTD

The main component of the RTD is the metal used in it. Platinum(PT) is the widely used metal in industries, apart from PT other metal used are Nickel and Copper. Platinum is the most common and has the best linear characteristics of the three, although Nickel has a higher temperature coefficient giving it greater sensitivity.

RTDs are either a metal film deposited on a form or are wire-wound resistors, which are then sealed in a glass-ceramic composite material. The coil is wound to be noninductive. The space between the element and the case is filled with a ceramic powder for good thermal conduction. The element has three leads, so that correction can be made for voltage drops in the lead wires.

The RTD connected in the thermowell is shown above, the sheaths are made of materials such as productive tube pyrex glass, Porcelain, quartz or nickel depending on the range of temperature and nature of fluid whose temperature is to be measured.

In PT100 the ‘PT’ defines that the metal is Platinum and the ‘100’ is the resistance in ohms at ice point (or 0°C). These are generally wire wound and are quite common in industrial uses.

200 and 500 ohm Platinum RTD’s are available but are more expensive and less common.

Platinum is most popular for RTD’s, it has good calibrated accuracy, is quite stable and has good repeatability, but is quite expensive. They are, however, not as sensitive as the Nickel and Balco devices. Nickel is not quite as repeatable but is less expensive.