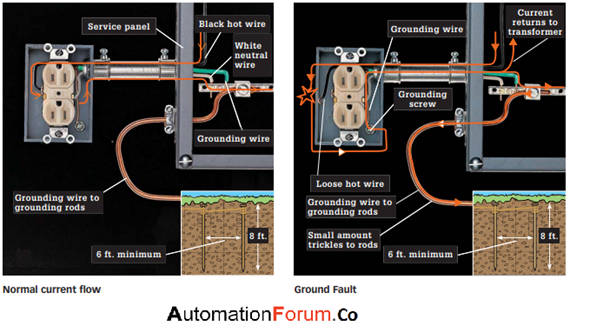 What is a grounding system

In an electrical network, the circuitry which provides a path between the parts of the circuit and the ground is known as the grounding system. The ground is essential for the reliable operation of the electrical equipment such as generator, transformer, power system tower…  Electrical equipment must be grounded they are grounded in such a way that the equipment voltage will be the same as the ground and it is called as equipment grounding. In case of power transmission and distribution grounding is inevitable, the towers in the transmission system are grounded by an earth electrode.

Why is it important for Electricity to be grounded

A system or circuit conductor which will be intentionally grounded, it is also known as the grounded conductor on a neutral wye system.

What is an ungrounded system

It is a system of conductors in which there is no intentional connection to the ground, ungrounded systems are grounded through distributed capacitance. In this system, the ground fault is very low and it can provide better reliability in faulty conditions. Ungrounded systems are used where service continuity is an important factor and the tripping the power distribution system off-line during the ground fault will be a problem. In this system, there is no grounding only the capacitive coupling from the power system conductors and equipment to the earth.

It is usually used in wye systems and this method is mostly used in the industrial, commercial and institutional power distribution system. in this method, the neutral is connected to the ground and thus it could ensure the neutral voltage is equal to the ground, by doing this method properly there won’t be any phase to ground over-voltages.

The neutral points of high voltage equipment like the transformer and generator are solidly grounded to reduce the insulation voltage level, it has a high value of current ranging from 10-20KA. This method can reduce the line to ground fault transients and it can locate faults easily

This method is also known as Peterson grounding because Peterson developed a coil which can limit the earth fault current in the undergrounded three-phase system. The coil will be in series with the line to the ground capacitance of each phase conductor and it is tuned to produce an impedance based on the series LC circuit and the coil will be adjusted according to what it is connected.

How does a SCADA system work?

What is a motor controller?