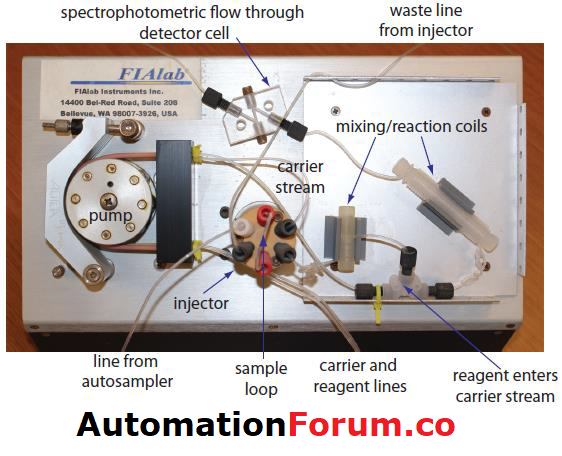 FIA (Flow Injection Analysis) is a technique with widespread application in quantitative chemical analysis. The FIA is the injection process of discrete sample solution into a continuously flowing unsegmented stream with subsequent analyte detection.

A method based on the injection of a sample liquid into a continuous flow that does not act on the corresponding fluid. The sample is injected to form a zone, which is then transported to a detector that continues to record absorbance, electrode potential or any other physical parameters, which continue to change as a result of part of the sample material going through the cell flow.

We directly inject the sample into the flowing carrier stream where it travels through one or more mixing and reaction zones before it reaches the flow cell of the detector.

The figure illustrates the simplest model for a single channel and one reagent reservoir for a fluid injection analyzer. It is also possible to use multiple channel instruments that merge separate channels together, each introducing a new reagent into the carrier stream.

The sample is injected into a continuous flow of reagent solution (carrier) in the simplest form of FIA, dispersed, and transported to the detector. Sample dispersion is controlled by selecting the appropriate sample volume, carrier flow rate, reaction coil length, and tube diameter.

Where FIAs are used?

FIA allows for the rapid, sequential analysis of an unlimited number of samples.

The study of flow injection was used to analyze a wide range of samples, including samples from the environment, medical, agricultural, industrial and pharmaceutical. Some analyzes include environmental and medical samples, which is this section’s subject.

Analytical flow injection methods for cationic, anionic and molecular pollutants in wastewater, freshwater, groundwater and marine waters have been developed

Connecting these units is a transport system that combines separate channels and gives the sample time to mix with the carrier stream and react with the streams of the reagents.

The propelling unit moves the flow injection analyzer through the carrier stream. Although several different propelling units were used, a peristaltic pump is the most common.

There are many types of injectors used such as syringe injector, rotary, or loop injector. The sample, typically 5–200 μL, is injected into the carrier stream.

The electrochemical and optical detectors used in HPLC are the most frequently used detectors for flow injection analysis. FIA detectors were also designed for the use of selective ion electrodes and atomic spectroscopy absorption.

A flow injection analyzer’s core is the transport system that combines the carrier stream, the sample, and any reagents that react with the sample.

Each reagent stream is considered a separate channel, and before the carrier stream enters the detector, all channels must merge. The entire transportation system is called a manifold.

This type of manifold is commonly used for direct analyzes not involving a chemical reaction. In this situation, the carrier stream only acts as a means of transporting the specimen to the detector easily.