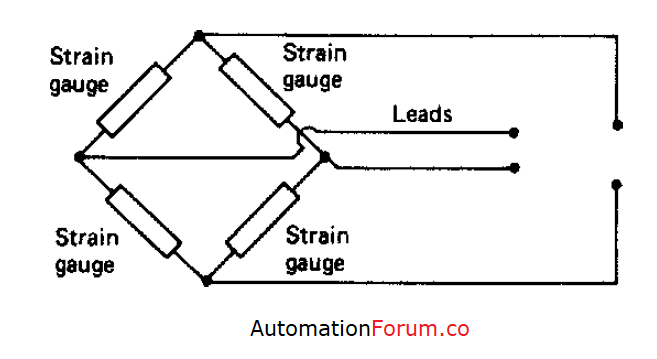 A strain gauge is usually connected in a Wheatstone bridge to measure its small resistance changes. This may be powered by DC, but AC is more common at frequencies of the order of kilohertz.

AC has the advantage of avoiding errors from the potential of thermocouples that may occur in leads when the junctions of dissimilar metals are at different temperatures.

Gauges have often mounted some distance from their associated measuring equipment and care must be taken to ensure that the long leads involved do not make mistakes.

In a simple gauge configuration, the two leads will be directly in series with the live gauge, and any changes in their resistance, for instance from temperature, will be indistinguishable from the strain.

The problem by using two lead can be overcome by having three leads to the gauge.

One lead is now in series with each of the two adjacent arms, thus providing compensation (for arms of equal proportion) provided that changes are reproduced in one lead in the other. The third lead is not critical, going to the power source. These are called arrangements for the quarter – bridge.

A half-bridge setup is sometimes used. This is when two strain gauges are both used in the measurement, as explained earlier

The four long leads are those connecting the power source and the out – of – balance detector when all four arms consist of gages at the measuring site. Their resistance is not critical, so even making sure that changes are equal is not necessary

As with most bridge circuits, the power source and the detector can be interchanged.

What are capillary lines? and what is it used for?