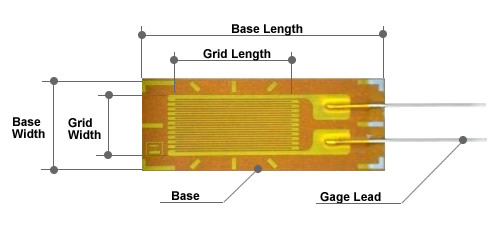 The strain gauge is a passive transducer used to pressure, which converts the change in pressure into a change in resistance as the metal strain gauge deforms because of the pressure applied.

The majority of strain gauges are foil type, available in a wide choice and shape and sizes to suit a variety of application.

Strain gauges in their infancy were metal wires supported by a frame. Advances in the technology of bonding materials mean that the wire can adhere directly to the strained surface. Since the measurement of strain involves the deformation of metal, the strain material need not be limited to being a wire. As such, further developments also involve metal foil gauges. Bonded strain gauges are the more commonly used type.

There is the Wheatstone bridge arrangement where the change in pressure is detected as a change in the measured voltage: