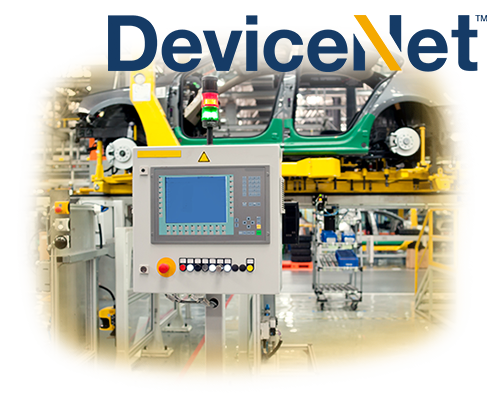 DeviceNet brings LAN technology down to the lowest level of the manufacturing enterprise –theshop floor.

Direct connectivity provides better communication between devices and a diagnosis to device level that would be impossible in the case of wired input/output interfaces. For another part, allows easy exchange of products, including similar components provided by different manufacturers.

DeviceNet supports a “trunk-line / drop-line” topology, which means that the nodes can be connected directly to the main line or by short branches (with maximum lengths of 6 m) Each DeviceNet network allows them to connect up to 64 nodes where a node is used by the master “scanner” and node 63 is reserved as the default node, with 62 nodes available for the devices. However, most industrial controllers allow connecting to multiple DeviceNet networks, with which the number of interconnected nodes can be expanded.

Thick cables are used for the main line since they allow a longer distribution length of the network.

It is based on the seven-layer ISO standard for communications networks (OSI model).

Through the CIP protocol, you can send Explicit messages (or information, which usually require a response from another unit but are not time critical) or Implicit (or control, are critical information packages used to transmit data in real time). Once the connection is made, the CAN identifier directs the information to the corresponding node. The functions that the CIP protocol fulfils in the different layers are:

The CIP object model works in producer-consumer mode, but network devices can be configured to operate in a master-slave architecture or a distributed control architecture using point-to-point communication.

The types of messages that are defined are: