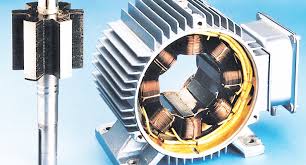 The switched reluctance motor is topologically and electromagnetically similar in design to the variable-reluctance stepper motor. The key differences lie in the details of the engineering design, the approach to control, and hence its performance characteristics.

The rate of change of inductance as a function of rotor position is one of the design parameters of the switched reluctance machine. it is clear that the torque does not depend on the direction of current flow, however, the voltage
must be reversed to reduce the flux-linkage to zero. A suitable power circuit for a single winding is shown:

The circuit is capable of operating the motor as either a motor or a generator, as vi can either be positive or negative, and the power flow is determined by the switching pattern of the power bridge relative to the rotor’s position.

A block diagram of a suitable controller for a basic switched reluctance motor is shown :

It is recognised that although this type of drive is simple, and gives adequate performance for speed control, it is incapable of providing instantaneous torque control as required by a servo or similar application.

To achieve a performance similar to a conventional servo-drive, commutation as a function of rotor position has to be replaced by a control strategy that produces the desired total motor torques by controlling the individual phase currents.

What is DeviceNet? Working, Topology