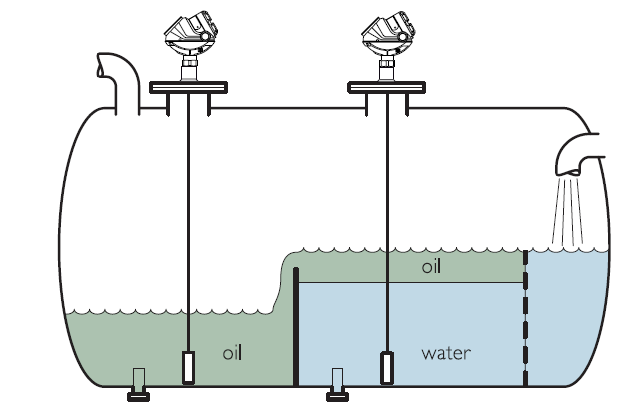 Interface level measurement is common in oil and gas, chemical industries. An interface is a limit between two immiscible liquids, due to its density difference.

The interface measurement finds the limit between the two liquids, therefore, to calculate the measurement of both quantities of liquid. You can use to pour only fluid from a tank that has two liquids.

There are two technologies suitable, guided and magnetostrictive

For single liquid level measurement, the guided wave radar reflects a signal from the air-liquid interface. The amount of reflected signal is the measure of level in the tank.

Another important factor in maximizing reflected power is the degree to which the microwaves disperse.

One way to compensate for the gas phase effect is to equip the instrument with a reference probe of fixed length oriented in such a way that its entire length is always above the liquid level.

The magnetostrictive meter is also an echo-based level instrument.

A magnetic float is placed in the metering rod of the magnetostrictive. The float produces torsional wave pulse on contact with the electromagnetic wave. The sensor on the top of the tank senses the torsional wave.

For interface level measurement, measuring rod has two floats having different densities. Such that each float can float above two liquid level. one to sense a liquid-liquid interface, and the other to sense the liquid-vapour interface.

How to install a Thermocouple in to a process?