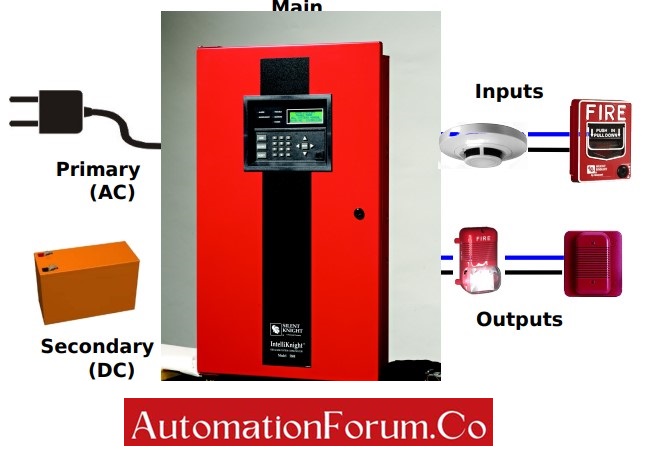 A fire alarm system would be composed of several devices and all of these devices would work together to inform people in case of fire, smoke, or other emergencies. Mostly smoke and heat detectors would activate these alarms. A fire alarm system is necessary to protect a building and also the people in it. This would be really useful to prevent the loss of life and property in case of fire in the building.

What are the major components of a Fire alarm control panel?

What are the major functionalities of a Fire alarm control panel?

What are the different types of Fire Alarm Control panels?

The Coded panel is almost the same as the modern conventional panel. This type of panel would have a motor or an electronic pulse generator. When the motor operates the code wheel will rotate. The code wheel is connected to individual zones in a building. During the rotation of the code wheel,it would make changes in the pulse generator and this will provide the code of the box.

This type of alarm system is not suitable for bigger buildings mostly it is utilized in small structures. It would alarm in case of any emergency situation. This type of control panel is less expensive and also it can be easily installed.  In this panel, there would be several LEDs and each LED represents different zones in the building. Each zone in the building would have smoke detectors and in case of any heat or smoke, it would transmit a signal. This type of control panel has a simple control unit and the initiating and notification devices would be connected to the dedicated circuitry.

This type of system can be defined as a system that is designed according to the customer’s requirements. The circuit in this panel is programmed for fire, smoke, etc. So in the programmable type, the input and the output circuitry are programmed for specific requirements.

This is another type of fire alarm control panel and it is utilized in bigger buildings such as Shopping-malls. This type of fire alarm system would require less wiring when compared to the conventional type. This system, has a signaling line circuit and it would provide power to the devices which are connected to the control panel, and also communication can be carried out.

This type of system is called an addressable system in this system it would transmit the data from the sensors in the building or the structure. So the detector would transmit all the details regarding the smoke level. It would have data from each detector.

What are the applications of fire alarm control panels?

What are the advantages of a fire alarm control panel?