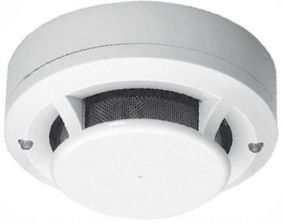 Smoke Detector is a tool for detecting smoke that arises from sources of fire. Smoke involves the thermal release of large quantities of solid and liquid particles into the surrounding atmosphere.  These particles that are suspended in the air are termed aerosols.

The aerosol particles that are produced in a fire are classified into two types of fire signatures according to their light scattering properties. Namely, invisible and visible fire signatures.
And there are two types of smoke detectors, Ionisation detector and Photoelectric detector.
Ionization detectors are most effective with invisible smoke particles and Photoelectric detectors are most effective with visible smoke particles and are applied where smouldering fires are anticipated.

Ionization Smoke Detector can react quickly to rooms with flammable materials, such as chemical chambers, with particles from 0.01 to 0.3 micron.

The sensor on the ion detector consists of two electrically charged plates and radioactive material between positive and negative plates. Collisions between molecules cause positive and negative ions. The ion will be attracted to both plates and cause a current with a certain value. If the chamber is exposed to smoke, the ion particles will change according to the incoming smoke and affect the current to a certain value and then the detector will work

This smoke detector type works on 2 dielectric pleats and a radiocarbon source to ionize the air between the two plates. Positive ions will be channelled from the positive terminal to the negative terminal, and vice versa electron ions will be channelled from the negative terminal to the positive terminal. If a smoke particle has sufficient levels to block the process of channelling these molecules, the current monitored by this tool will increase, when the current reaches a certain point, the alarm will sound.

Where smoke will enter through the cracks at the end of the smoke detector which will hinder the process of moving ions from negative electrodes to positive or vice versa.

Photoelectric sensors continuously emit light to a receiver diode, if the light power decreases to a certain value because it is blocked by the amount of smoke entering the detector then an alarm will occur.

In addition, there is photo smoke using a reflection system, if there is smoke coming in, then the smoke will reflect the light to the receiver. If the received light reaches a certain value then the Alarm will occur.

Photoelectric is very fast working on smoke particles between 0.3 to 10 microns. In this module used is the smoke detector.

What is PLC scan and it’s working

How do Boiler accessories help in increasing Boiler efficiency?

What are the various causes of electric motor failure?