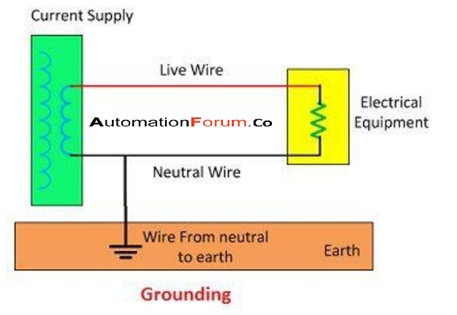 What is the purpose of neutral in power transmission?

Can we get an electric shock from a neutral wire?

Do we need to connect the neutral wire to the ground?

What is the difference between a neutral and ground?

A ground wire is used in AC mains, so that it could provide a low impedance path and by that it could prevent high voltages and could protect the equipment. Whereas a neutral is a conductor that carries the current from the hot wire and it would be sent to the source. A neutral wire can be grounded, the color of the ground wire could be green and the color of neutral wire could be white or grey. Grounding is done in parts or conductors that carry current and the ground wire won’t carry any electrical current during the normal operating conditions. So in case if there is an electrical fault then only the ground wire will allow the flow of electrical current and the resistance of the ground wire will be very less so that during any fault conditions the electricity will choose to travel through the ground wire. So grounding is done to most of the electrical equipment so that if the hot wire touches the metal part of the equipment it won’t hurt any personnel.

What is the difference between a neutral wire and a hot wire?

Electric current will only travel in a complete circuit and it will flow from high potential to low potential. The electric current will return to its source and that’s how it completes a circuit. In the above image, we can see a live wire or hot wire is used to carry the current from the current supply and it will reach the equipment or the load through the neutral wire. This current in the equipment needs to flow to the current supply or the load and this is done by using a neutral wire.

How to read a motor nameplate

What are the different methods of Transformer Oil Testing?