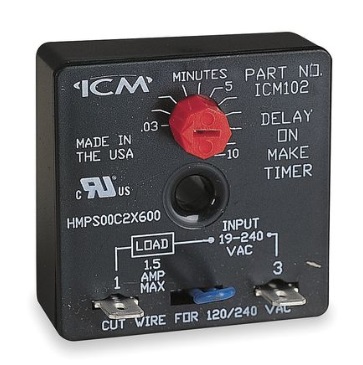 The power or signal power can be thermal, pneumatic, AC, or DC electric current. The change in the state of the timer can be mechanical (e.g., caused by the rotation of a motor, the motion of a plunger in a restricting fluid, or the bending of a bimetal strip caused by a change in temperature), electrical (e.g., caused by an accumulation of charge of a capacitor or a count of oscillations or pulses), or software-based (e.g., based on the number of program scans or interrupt-driven). The load switching can occur via snap-action switches, snap-action valves, relay contacts (e.g., SPDT, DPDT, reed hermetically sealed], or mercury [hermetically sealed]), or
solid-state devices (e.g., transistors, SCRs, or triacs).

The mode of the time delay determines the relationship between the time when the signal power is applied to the time of load switching. This relationship may also depend on the continuous presence of the power source. The four most prevalent modes are on-delay, off-delay, interval, and single-shot. A special combination of the on-delay and the off-delay is called a repeat cycle timer

Recovery time is the minimum amount of time between removal of the signal power and its reapplication, which is necessary so that the subsequent operation will have the desired repeatability. The analog or digital solidstatetiming circuits have the shortest recovery time.

An on-delay is alternatively called delay on make, delay on operate, delay on pull-in, delay on energize, slowacting,
or slow-operating. The load switching occurs a certain time after the application of the signal power. If a power source is normally required and the power is interrupted before load switching takes place, the timing cycle has
to be repeated from 0 to effect a delayed load switching (except in certain synchronous motor-driven delay relays).

An off-delay is alternatively called delay on break, delay on de-energize, delay on drop-out, delay on release, slow release, drop-out delay, or delayed drop-out. The load switching occurs a certain time after the removal of the signal power. If the power source is normally required and the power is interrupted before the minimum amount of time or after removal of the signal power prior to load switching, the amount of time delay may be inaccurate.

A repeat cycle relay is alternatively called dual delay; combination delays; on-delay, off-delay; or slow acting-slow releases; or asymmetric pulser. The load switching occurs a certain time delay after the application of the signal power, and remains energized for another time delay after the removal of the signal power. If the power source is
normally required and it is interrupted while the load switching is energized, it may be de-energized prematurely. The asymmetric pulser has the added feature of two time periods, one for the on period and one for the off period.

What is Microprocessor Based Relay?

What are the Characteristics of trip Curves of the MCB?