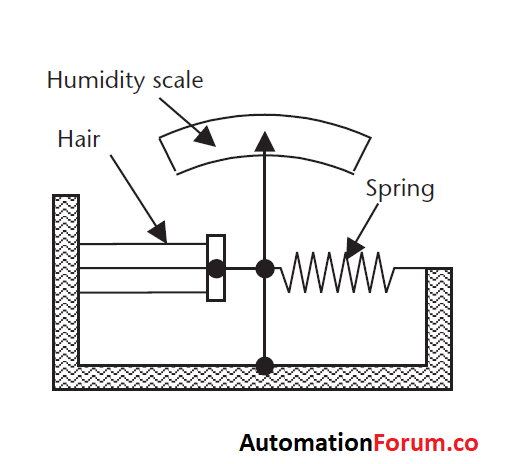 Humidity can be measured using materials that absorb water vapor, giving a change in their characteristics that can be measured; by measuring the latent heat of evaporation; by dew point measurement; or by microwave absorption. There are two types of meters, Psychrometers & Hygrometers.

A psychrometer uses the latent heat of vaporization to determine relative humidity. If the temperature of air is measured with a dry bulb thermometer and a wet bulb thermometer, then the two temperatures can be used with a psychrometric chart to obtain the relative humidity, water vapor pressure, heat content, and weight of water vapor in the air. Water evaporates from the wet bulb, trying to saturate the surrounding air. The energy needed for the water to evaporate cools the thermometer, so that the drier the day, the more water evaporates and the lower the temperature of the wet bulb.

To prevent the air surrounding the wet bulb from saturating, there should be some air movement around the wet bulb. This can be achieved with a small fan, or by using a sling psychrometer, which is a frame holding both the dry and wet thermometers that can rotate about a handle. There are two temperature sensors, one dry and one in a moist wick (the end of the wick is dipped in a water reservoir). Air is moved over the sensors with a small fan. This setup gives a continuous electrical signal that can be correlated to humidity

The thermometers are rotated for 15 to 20 seconds. The wet bulb temperature is taken as soon as rotation stops, before it can change, and then the dry bulb temperature (which does not change) is taken.

Devices that indirectly measure humidity by sensing changes in physical or electrical properties in materials due to their moisture content are called hygrometers. Some materials, such as hair, skin, membranes, and thin strips of wood, change their length as they absorb water. The change in length is directly related to the humidity.

There are different types of hygrometer:

A Laminate hygrometer is made by attaching thin strips of wood to thin metal strips, forming a laminate. The laminate is formed into a spiral or a helix. As the humidity changes, the spiral flexes, due to the change in the length of the wood. One end of the spiral is anchored, and the other is attached to a pointer (similar to a bimetallic strip used in temperature measurements), and the scale is graduated in percentage of humidity.

The hair hygrometer is the simplest and oldest hygrometer, and is made using hair. Human hair lengthens by 3% when the humidity changes from 0% to 100%. The change in length can be used to control a pointer for visual readings, or to control a transducer, such as an LVDT, for an electrical output. The hair hygrometer has an accuracy of approximately 5% for the humidity range 20% to 90%, over the temperature range −15° to 70°C.

Resistive hygrometer humidity sensors use the change in resistance of a hydroscopic material between two electrodes on an insulating substrate. The electrodes are coated with a hydroscopic material (i.e., one that absorbs water, such as lithium chloride) [2]. The hydroscopic material provides a conductive path between the electrodes, and the coefficient of resistance of the path is inversely proportional to humidity. Alternatively, the electrodes can be coated with a bulk polymer film that releases ions in proportion to the relative humidity. Temperature correction can be applied again for an accuracy of 2% over the operating temperature range −40° to 70°C, and relative humidity range 2% to 98%. An ac voltage is normally used with this type of device. At 1 kHz, a relative humidity change from 2% to 98% typically will give a resistance change from 10 MΩ to 1 kΩ. Variations of this device are the electrolytic, and the resistance-capacitance hygrometer.

A capacitive hygrometer uses the change of the dielectric constant of certain thin polymer films that change linearly with humidity, so that the capacitance between two plates using the polymer as the dielectric is directly proportional to humidity. The capacitive device has good longevity, a working temperature range of 0° to 100°C, and a fast response time, and it can be temperature compensated to give an accuracy of ±0.5% over the full humidity range.

Piezoelectric or sorption hygrometers use two piezoelectric crystal oscillators. One is used as a reference and is enclosed in a dry atmosphere, and the other is exposed to the humidity to be measured. Moisture increases the mass of the crystal, which decreases its resonant frequency. By comparing the frequencies of the two oscillators, the humidity can be calculated.

What is a Sling Psychrometer?