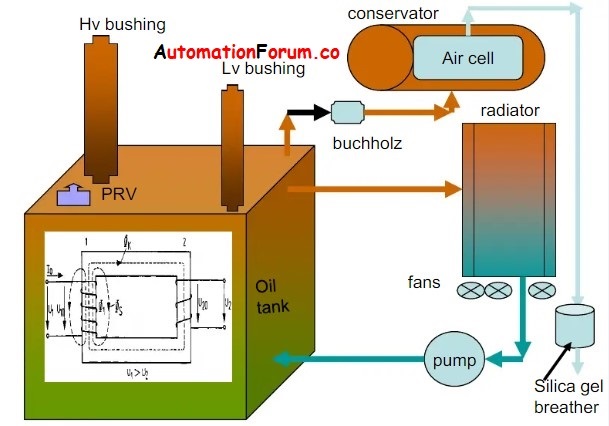 What is a Transformer?

Electrical power is transformed from one circuit to another circuit using a static electrical device called an electrical transformer without affecting the frequency. Transformers have the ability to change the voltage while also altering the current. AC current is used for transmission. The transformer operates on the core concepts of electromagnetic induction and mutual induction. Depending on the transformer’s turns ratio, the voltage is raised or lowered. In proportion to changes in voltage, current likewise changes. As a result, the power is unchanged.

According to Faraday’s law of electromagnetic induction, EMF is generated in the secondary winding as a result of the flux produced being alternating (its direction continuously changing). This emf is referred to as “mutually induced emf,” and its frequency is identical to that of supplied emf. Electrical energy is transmitted from one circuit (primary) to another circuit if the secondary winding is closed circuit and is therefore conducting mutually induced current (secondary).

Construction of a Transformer:

When constructing a small-sized transformer, there are very few moving parts. The primary and secondary windings are attached to a transformer core. For high-power transformers, a transformer tank with additional accessories is used to enclose the core and windings.

The transformer’s core serves as a support for the winding. Additionally, it offers a magnetic flux flow route with minimal resistance. As seen in the image, the winding is looped around the core. To cut down on losses in a transformer, it has a laminated soft iron core. Core composition is determined by variables including operational voltage, current, and power, among others. The core diameter is negatively correlated with iron losses and directly correlated with copper losses.

The transformer core is covered with a group of copper wires called winding.

Copper has a high conductivity and resistance to current flow lowers with increasing conductivity, this material’s low loss reduces loss in a transformer.

The quality of metals that enables them to be formed into very thin wires is called high ductility, and copper has this quality.

There are primarily two sorts of windings,

Using insulating coating materials, the primary and secondary windings are separated from one another.

Both the steel core and the coils are isolated from one another. A transformer could additionally have a tank-style container for the winding and core assembly, suitable bushings for the terminals, and an oil conservator to provide oil in the transformer, tank for cooling transformers, etc.   All types of transformers’ cores are built by stacking laminated steel sheets together and minimal space between them for air (to achieve continuous magnetic path). The steel employed seems to have a high silicon content in order to give high permeability and less hysteresis loss, and rarely heat treatment. Steel sheets that have been laminated are utilised to lessen eddy current loss. The sheets are shaped into letters E, I, and L. Laminations are built by switching the sides of joints in order to prevent high resistance at joints. In other words, if the first sheet assembly’s joints are on the front face, the next assembly’s joints will be on the back face.

Working of a Transformer:

When the primary winding is connected to an AC power source, a magnetic field is created around the coil as a result of the current flowing through it. As a result of this flux’s connection to the iron core, the flux begins to circulate inside the iron core. The magnetic flux is retained in the iron core because its permeability is approximately 1000 times greater than that of the surrounding air.

The magnetic flux circulates and connects with the transformer’s secondary winding when it reaches the other limb. The secondary winding experiences an EMF (Electromotive Force) as a result of this operation, in accordance with Faraday’s law. Current will begin to flow in this circuit if we attach an electrical load to the secondary side, such as an Induction motor or Synchronous motor.

The transformers are characterized based on:

Application of the Transformer:

What is an Alternator and explain its function?

What are Auxiliary Current Transformers ?