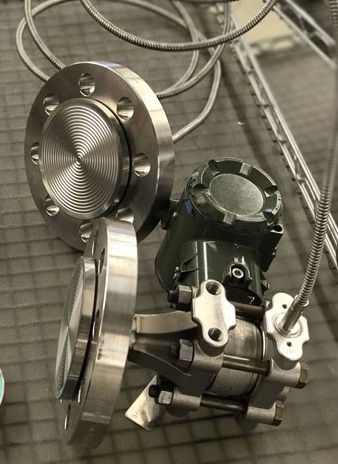 Diaphragm Seals, also referred to as chemical seals, are used in applications where the pressure sensor requires isolation from the process media. These applications may be corrosive, high temp, clogging, or require a sanitary fluid to remain captured in the piping or vessel. Rather than the process fluid interfacing with the pressure sensor, the pressure is exerted onto the flexible diaphragm and transmitted hydraulically to the instrument through the fill fluid. When properly mounted and filled a diaphragm seal assembly will have minimal effect on the instrument’s performance.

Direct Mounting a pressure gauge, switch, or transmitter is the most common diaphragm seal assembly.

Used in either high temp or cold temp applications, Cooling Elements mounted above diaphragm seals quickly normalize fluid temperature toward ambient. This protects the pressure instrument while still maintaining the convenience of a direct mount.

Tree Assemblies offer the ability to mount two pressure instruments onto one diaphram seal, allowing the user to gain both a local indication and a remote signal without adding an additional pipe insertion.

Three conditions account for the majority of diaphragm failures. They are:

The following measures can be taken to combat these causes:

Corrosion of the diaphragm is due to the choice of the wrong material for a particular service. Modern chemistry is so complex that it is difficult to establish strict rules with respect to the proper diaphragm materials. For example: a change in the concentration or temperature of a chemical will cause corrosion that will not occur with the same chemical at a different concentration or temperature. Diaphragm faults are rarely mechanical in nature, since diaphragm deflection (for the entire range of a Bourdon tube gauge) is only a few thousandths of an inch. Never touch the accessory with a sharp object, such as a screwdriver, that can pierce the diaphragm. If it is necessary to clean the accessory, use the removable type that allows the lower housing to be removed without damaging the liquid seal.
Different metals in contact with each other can also cause galvanic corrosion.

High temperatures can cause the diaphragm to bulge outward. When such a bulge occurs, the type of liquid filling should be examined. If the filling that is used is not suitable for the process temperature, a suitable filler should be used. When the fitting or meter is to be filled with another filling fluid, it is important to thoroughly clean the old liquid.

Failure due to leakage of filling may be due to nicked gasketing surfaces at the O-ring on the diaphragm capsule stud or the gauge connection into the attachment may not be tight. Therefore a new O-ring, a new top housing (if the seal surface is nicked); or tightening may be needed.

What are Oil Burners? Types of Oil burners available: