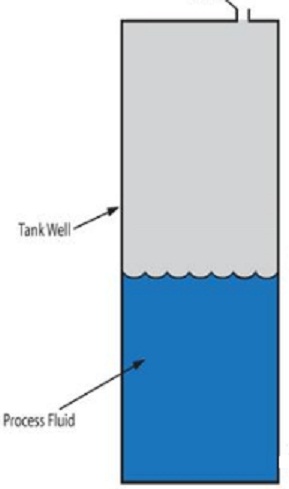 There are many methods for measuring level ;Direct level measurement techniques and indirect methods.in this session we are going to discuss about direct  level measurement techniques The direct sensing, in which case the actual level is monitored, and indirect sensing where a property of the liquid such as pressure is sensed to determine the liquid level

Sight glass  or gauge is one of the simplest  Direct level measurement techniques. As shown in Figure the sight glass is normally mounted vertically adjacent to the container. The liquid level can then be observed directly in the sight glass.

when the container is closed, In this case the ends of the glass are connected to the top and bottom of the tank, as would be used with a pressurized container (boiler) or a container with volatile, flammable, hazardous,
or pure liquids. In cases where the tank contains inert liquids such as water and pressurization is not required.

There are 2 types of simple float sensors shown in figure below.The density of the liquid is higher than float material.

In Figure a float with a pulley is used; this method can be used with either liquids or free flowing solids. An advantage of the float sensor is that it is almost independent of the density of the liquid or solid being monitored. If the surface of the material being monitored is turbulent, causing the float reading to vary excessively, some means of damping might be used in the system.

In Figure below a ball float is attached to an arm; the angle of the arm is measured to indicate the level of the material (an example of the use of this type of sensor is the monitoring of the fuel level in the tank of an automobile). Although very simple and cheap to manufacture, the disadvantage of this type of float is its nonlinearity as shown by the line of sight scale in Figure. The scale can be replaced with a potentiometer to obtain an electrical signal that can be linearized for industrial use.

Figure below shows an alternative method of using pulleys to obtain a direct visual scale that can be replaced by a potentiometer to obtain a linear electrical output with level.

A displacer with force sensing is shown in Figure. This device uses the change in the buoyant force on an object to measure the changes in liquid level. The displacers must have a higher specific weight than that of the liquid level
being measured and have to be calibrated for the specific weight of the liquid. A force or strain gauge measures the excess weight of the displacer. There is only a small movement in this type of sensor compared to a float sensor.

This technique is used in liquids that have a high dielectric constant and non conductive in nature and can be used for continuous level monitoring.

What is proportional, integral and derivative control?