AutomationForum.Co
In most processes, there are six basic elements.Process control elements are 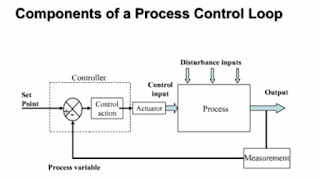 The desired value of the controlled variable; for example, 70 room temperature

The difference between the set point and the actual value of the controlled variable (which is the measured variable). For example, if your indoor thermometer reads 65   and you would like a room temperature of 70, the deviation is 5
Note: Deviation is also referred to as difference or error.

The variable that is adjusted to close the gap (deviation, difference, or error) between the set point and the controlled variable; for example, the amount of electricity or gas to the heater.

Anything that affects the process and could cause deviation from the set point; for example, a window left open, poor insulation, a damaged thermostat.
Learn more about Process Variable
previous post

What is the difference between OT & IT networks?