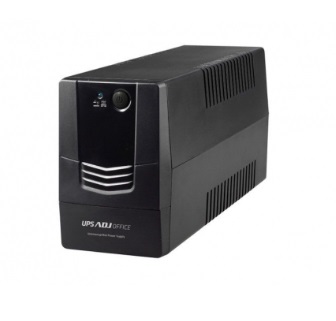 An UPS system is an alternate or backup source of power with the electric utility company being the primary source. The UPS provides protection of load against line frequency variations, elimination of power line noise and voltage transients, voltage regulation, and uninterruptible power for critical loads during failures of normal utility source. An UPS can be considered a source of standby power or emergency power depending on the nature of the critical loads. The amount of power that the UPS must supply also depends on these specific needs. These needs can include emergency lighting for evacuation, emergency perimeter lighting for security, orderly shut down of manufacturing or computer operations, continued operation of life support or critical medical equipment, safe operation of equipment during sags and brownouts, and a combination of the preceding needs.In this session we are gonna discuss about Difference between Static UPS and Rotary UPS.

A static UPS is a solid-state system relying solely on battery power as an emergency source. A static UPS consists of a rectifier, inverter, and an energy storage device, i.e., one or more batteries. The inverter in the static UPS also includes components for power conditioning. Modern static UPS systems are constructed with ratings ranging from about 220 VA to over 1 MVA. Static UPSs ranging from 220 VA to 1 MVA are constructed without paralleling internal components. UPS with output higher than 1 MVA are built with some parallel internal components, which result in decreasing reliability. Figure  shows a simple static UPS. Design, installation, and maintenance requirements should follow the latest version of applicable codes and standards from recognized industry and commercial groups.

A rotary UPS is a system that uses a motor-generator (M-G) set in its design. Figure  illustrates a simple rotary UPS. Unlike static units, the basic parts may vary between manufacturers for rotary units. Rotary units are mainly designed for large applications, 125 kVA or higher. Some reasons for selecting a rotary UPS over a static UPS are to provide higher efficiency, superior fault clearing capability, capability of supplying currents for high inrush loads, and isolation from harmonic distortion generated by non-linear loads in the line. Rotary UPS bearings must be replaced periodically. Although this might make reliability between the two types debatable, bearing failure is highly predictable with stringent routine testing. Rotary units produce more heat than do static units due to their M-G sets. They are more costly for small capacities but become competitive with static units around 300 kVA. Rotary units provide complete electrical isolation where the static UPS is limited by the static switch. Extremely high voltages or rapidly rising voltages can pass through the static switch and damage critical loads.

Difference between AC and DC Motors

What is transient in a power system?