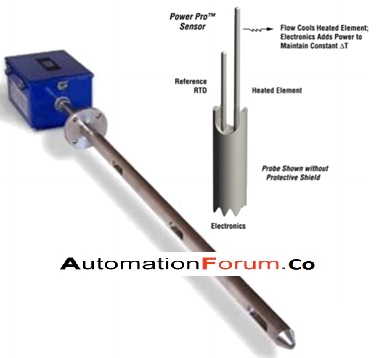 A mass flow meter measures the mass of the substance per unit time that travels through the tube. A volumetric flow rate is the mass flow rate divided by the fluid density. The density of the fluid could vary with temperature, pressure, and composition. There are two types of mass flow meter they are thermal and Coriolis flowmeter

The thermal flow meter measures the mass of the fluid flow with the help of a thermistor, so this meter uses a thermistor that has only one sensor tip and it would be inserted into the flow stream. So it won’t get clogged and can also measure very low flow rates. This flow meter works on the principle of thermal conductivity. This meter will introduce heat into the flow stream and it measures the heat dissipation amount. The thermal mass flow meter is independent of the density, pressure, and viscosity of the fluid.

In this type it uses two temperature sensors, a heated sensor and the other one is to measure the gas temperature and the mass flow rate is determined based on the electrical power needed to keep the temperature difference between the sensors.

How to install a thermal mass flow meter

The meter must be installed in a way that, it must be full of liquid so that the air won’t be trapped inside the tube. It must not be installed where the flow is downward in a vertical pipe.

What are the advantages of thermal mass flow meter

What are the applications of thermal mass flow meter

This device also measures the mass of the liquid and this meter is U shaped. The fluid will flow through a U shaped tube. The tube is made to vibrate and this vibration will be perpendicular to the fluid flow. Because of the energy and velocity of the fluid, it resists the vibrating motion of the tube, and that makes it twist sideways. The degree of deflection is linearly and directly proportional to the mass of the fluid that passes through the tube. The amount of twist is measured by the magnetic position sensors. The output from each sensor is conditioned to standard signals before it is sent to the control equipment. The major advantage of a Coriolis flowmeter is its high accurate mass flow measurement and it is not dependent on the fluid properties.

What is a Coriolis flowmeter and how does it work

How to test a 3 phase motor by using a megger

what is Turbine flowmeter?

What is a turbine flow meter and how is it constructed