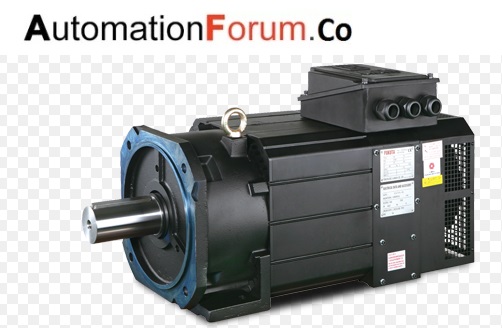 Servo motors come in so many types and flavors that it is difficult to define them in a way that is accurate and universally acceptable. However, it is possible to describe some of the things commonly found in servo drives.
as typical configurations.

The encoder is a sensor for detecting the speed and position of the motor.
Light from the light-emitting diode (LED) passes through a position detection pattern on the slit disk and is read by the light-receiving component. Dozens of phototransistors are integrated in the light receiving component. Every pattern for absolute positioning detection varies depending on the encoder rotation angle.
The CPU is installed in the encoder to analyze the pattern for absolute positioning detection. The current position data is transmitted to the servo driver via serial transmission

DC brush motors
DC motors can be either rotary or linear. Rotary DC motors typically are long and thin, which allows for quick
acceleration due to the lower inertia, as well higher speed due to the lower centrifugal forces of a smaller diameter
armature . The armature is skewed to help reduce low-speed “velocity ripple.

Linear DC motors have the commutator and windings along the path of travel, and power may be supplied to the brushes by a bus bar or an umbilical cord . The “moving short” with the brushes has a permanent magnet, which is attracted to the energized stationary coil. A linear bearing is used to create an air gap and low friction

Brushless DC motors may be either rotary or linear and come in many varieties. They are probably the most prevalent kinds of servo motors due to their quick response time, low inertia-, weight- and size-to-torque ratios, and
reasonable cost. Rotary brushless DC motors have either ceramic or rare earth magnets banded onto the rotor .

AC induction servo motors can be linear or rotary. The rotary design typically is long and thin, making it suitable for
higher speeds and quicker acceleration and deceleration profiles due to the lower inertia. A separate constant-velocity blower motor is often attached to the back of the servo motor for cooling during low-speed operation. The stator has a standard, low-inductance, three-phase AC motor winding, which sometimes has special volts/hertz ratings and/or wye-delta switching.

The encoder is a sensor that notifies the driver of the motor speed and position. The encoders (position detector) used for the servo motor are structurally classified as “incremental encoders” and “absolute encoders.” Oriental Motor uses a 20-bit absolute encoder for our servo motors NX series for low vibration at low speed range.

Tachometers use a field of permanent magnet. The armor, which is coupled to the motor shaft, induces a DC voltage
proportional to the speed as the shaft rotates. This voltage It is carried out through a switch and brushes to the amplifier for the speed and address information

The amplifier converts the output power from the distribution panel to controlled output that will cause the motor
to move at the correct velocity. Most servo amplifiers are PWM (pulse width modulated) style. The converter section of a single-axis amplifier uses a diode bridge to change AC input power to DC power, which is then “smoothed out” by the addition of a capacitor. This DC section is called the bus

When to use stepper vs. servo motor?

What is a Stepper Motor?

What is a Junction box, and its applications?