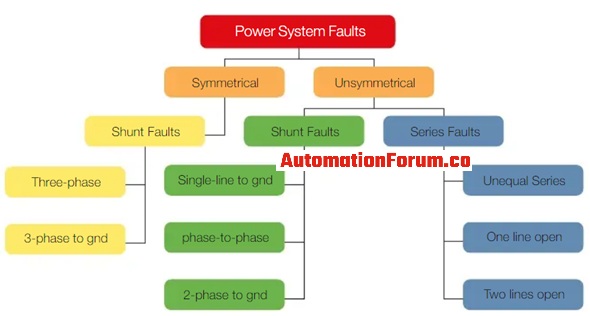 What is a fault in the electrical system?

A fault in a power system can be described as an abnormal condition that interrupts the normal flow of current. Due to the fault, a huge amount of current would flow through the conductors or the cables and this flow would take place mostly through the inappropriate paths in the circuit. During the normal operating conditions of the power system, the electrical current through the circuit would have magnitude and it will be dependent upon the value of the generator voltage and also the impedance of the transmission and the distribution system.

What are the major reasons for the power system faults?

So due to this the power system must be protected from heavy short circuit currents because it would damage the equipment. We can use circuit breakers and protective relays to protect the power system. The power system faults can also happen due to thermal or mechanical failures. Thermal faults could happen due to high ambient temperature, coolant loss, overvoltage, and over current. Mechanical faults could happen because of the earthquake, heavy wind, snow, or ice, it can also happen because of the forces created by the overcurrent.

What is a short circuit?

In case if the system insulation is damaged at a certain point, or in case if any conducting object comes in contact with a bare power conductor then it is called a short circuit or a fault.

What is the effect of faults in a power system?

The effect of the fault in a power system is depended upon the type of fault, fault duration, fault location, and also the short circuit capacity of the source.

What is the voltage collapse in a power system?

Major reasons for the voltage collapse

What are the temporary and permanent faults?

The temporary faults are faults that would only occur for a certain period of time and can be cleared without interrupting operation. A lightning strike is the major type of temporary fault because it won’t create any permanent damage.

These faults would interrupt the operation of the power system, so in order to clear the faults, there should be the involvement of the protection engineers. The permanent faults are created by the wind, thermal heating, and sag.

What are the active and passive faults?

The passive faults can’t be considered as real faults, it can be described as a condition that would make the system stress beyond its design capacity.

What are the different types of faults in a power system?

Major reasons for the unbalanced faults

The line to line fault

This type of fault is caused when two lines would come into contact with the ground. In the faulted phase there will be a rise in current and also a drop in voltage.

What is transient in a power system?

What is a redundant power supply?