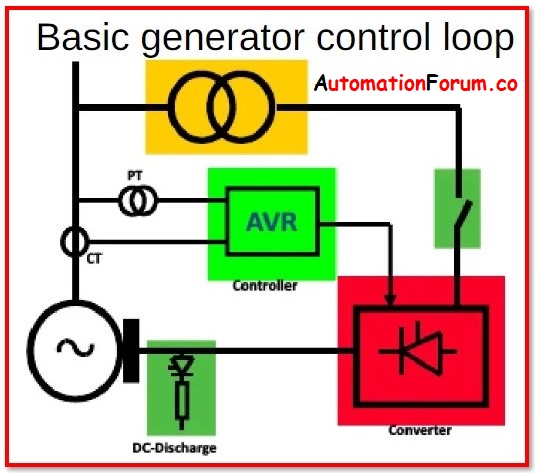 What is Excitation System?

Excitation is the technique of creating a magnetic field using an electric current. An excitation system’s primary job is to supply direct current to the synchronous machine field winding. The excitation system regulates the field voltage and field current to carry out control and protective tasks necessary for the power system to operate satisfactorily.

can both be controlled, and system stability can be improved.

Each alternator has its own exciter, which takes the shape of a generator, in the excitation system, which is a single unit. The bus-bar is fed by two or more exciters in the centralised excitation system. The central system is very affordable, but it has a flaw that negatively impacts the power plant’s alternators.

1.The primary function of a generator’s excitation system is to provide the rotor field coil with power.

2. The rotational field in the armature is excited under control by the excitation system.

Requirement for an excitation control system:

The synchronous generator and the power system are taken into account while determining the performance requirements of the excitation system.

The primary need is that the synchronous generator’s field current be supplied by and automatically adjusted by the excitation system to maintain the terminal voltage while the output varies within the generator’s continuous capabilities.

2. Implement the necessary level of redundancy and internal fault detection and isolation capability to achieve the desired dependability and availability.

3.As applicable, perform limiting and protective functions to guard against harm to the generator, the equipment, and the device itself.

Components of an excitation system:

The structural layout of a typical excitation control system for a big synchronous generator.

The various subsystems shown in fig. are briefly described below:

There are 3 types of Excitation System:

1. What is Automatic Voltage Regulator?

2. What is Controlled Rectifier?

A Controlled Rectifier rectifies AC to provide a controllable DC voltage and/or current using SCRs, possibly in combination with diodes. By regulating the firing angle alpha, control is gained. These rectifiers can be used in

What is a megger and how is it used