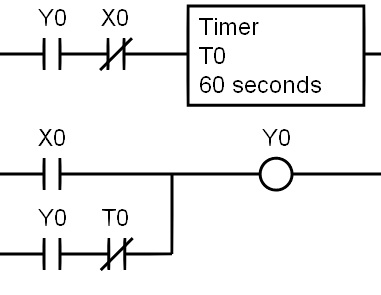 This function is used to provide a time-delay in a circuit. In the example shown in figure, a switch-off delay is used to delay the off-time. The lamp P1 will be off after 5 seconds.An ON delay timer will wait a set amount of time after a ladder logic line has been true before turning on, but will turn off immediately. A OFF delay timer will turn on immediately when a ladder logic line is true, but will be delayed before shutting down. Consider the example of an old car. If you turn the key in the ignition and the car does not start immediately, that is a an ON delay. If you turn the key to stop the engine, but the engine does not stop for a few seconds, it is an OFF delay. An ON delay timer can be used to allow a furnace to reach the temperature before starting production. An OFF delay the disconnection can keep the fans turned on for a certain time after the oven has been turned off.we are gonna discuss about PLC timer’s

The Figure shows an example of an Allen-Bradley TON timer. The rung has a single input  A  and a function block for the TON. (Note: This timer block will look different for different PLCs, but it will contain the same information.) The information inside the timer block describes the time parameters. The first element is the ‘example’ timer. This is a location in the PLC memory that will store the timer information. The preset is the millisecond delay for the timer, in this case it is 4s (4000ms). The value of the accumulator gives the current value of the timer as 0. While the timer is running, the accumulated value will increase until it reaches the preset value. Whenever input A is true, the EN exit will be true. The DN output will be false until the accumulator has reached the preset value. The outputs EN and DN can not be changed during programming, but they are important when debugging a ladder logic program. The second ladder logic line uses the DN output of the timer to control another output B.

Consider the short ladder logic program in Figure for control of a heating oven. The system is started with a Start button that seals in the Auto mode. This can be stopped if the Stop button is pushed. (Remember: Stop buttons are normally closed.) When the Auto goes on initially the TON timer is used to sound the horn for the first 10 seconds to warn that the oven will start, and after that the horn stops and the heating coils start. When the oven is turned off the fan continues to blow for 300s or 5 minutes after.

A program is shown in Figure below that will flash a light once every second. When the PLC starts, the second timer will be off and the t_on.DN bit will be off, therefore the normally closed input to the first timer will be on. t_off will start timing until it reaches 0.5s, when it is done the second timer will start timing, until it reaches 0.5s. At that point
t_on.DN will become true, and the input to the first time will become false. t_off is then set back to zero, and then t_on is set back to zero. And, the process starts again from the beginning. In this example the first timer is used to drive the second timer. This type of arrangement is normally called cascading, and can use more that two timers

Siemens Timer program is given below

Troubleshooting of a transmitter

How to write a PLC ladder logic program?