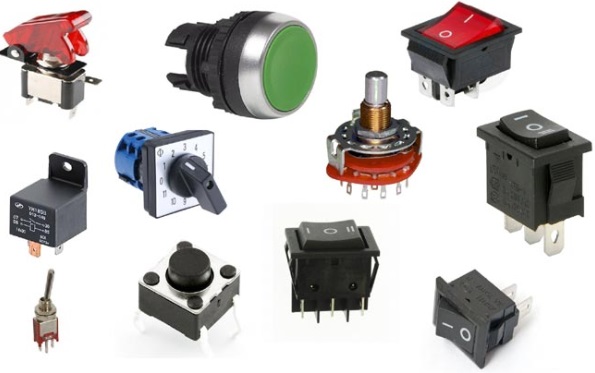 Switch is a device that can break a circuit and also connect them again to set some kind of electrical things. This device can be referred as one of the main device in a circuit. There’s a lot of switches that usually used in industrial aspects:

This kind of switch is the most common switch that we used daily. the mechanism is as simple as breaking and connecting the circuit current.

This kind of switch is usually used in small scale circuit. the mechanism is quite same with toggle switch but with “slide” operations. this slide is also can be used as selector switch.

This also types of switches that really familiar with our daily lives. this is a kind of mechanical switches that manually break or connect the circuit by using spring mechanism that applied to the button.

This switches using floating object principle to operate, it will give an action when the floating object is reacing certain level. it can also called as liquid level sensor. it can be applied for valve control in a water reservoir.

Do you know What are different kinds of level switches?

Pressure switches is a switch that using a certain pressure level as the input. this kind of switch is usually used in automobiles industries. it’s also can be used for controlling safety factor in a production floor. this kind of switch divided into Pneumatic switches and Hydraulic Switches.

However, switch is an important device that used in electrical thing, the application of this device is highly various depends on what’s needed.