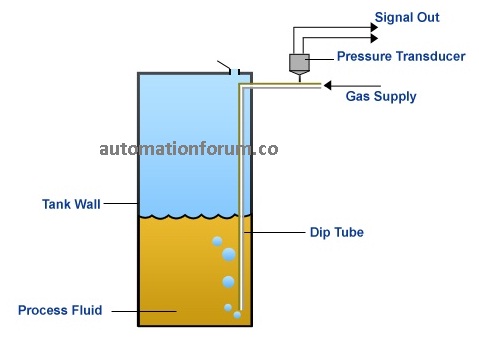 If the process liquid contains suspended solids or is chemically corrosive or radioactive, it is desirable to prevent it from coming into direct contact with the level transmitter. In these cases, a bubbler level measurement system, which utilizes a purge gas, can be used.

As shown in Figure, a bubbler tube is immersed to the bottom of the vessel in which the liquid level is to be measured. A gas (called purge gas) is allowed to pass through the bubbler tube.

Consider that the tank is empty. In this case, the gas will escape freely at the end of the tube and therefore the gas pressure inside the bubbler tube (called back pressure) will be at atmospheric pressure.

As the liquid level rises, the backpressure in the bubbler tube increases proportionally, since the density of the liquid is constant.

A level transmitter (DP cell) can be used to monitor this backpressure.

Level Measurement : What is bubbler system ? Advantages and Disadvantages