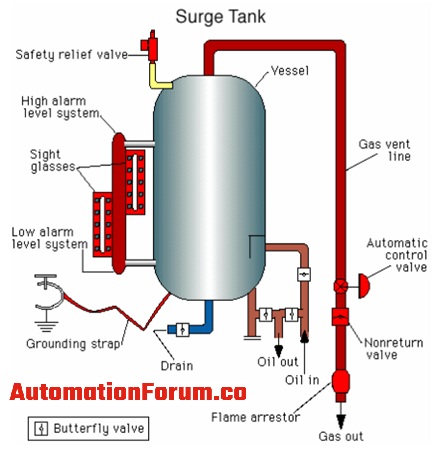 A surge tank can be described as a storage reservoir, this device would be installed in large pipelines so that this tank can relieve the pipeline from surge pressure which is caused by the changes in fluid flow. The surge tank would also give water to decrease the negative pressure if the valve is quickly opened. If there is a surge the tank will act quickly to relieve the pressure and this would also store excess liquid, giving the flow alternative storage better than that provided by the expansion of the pipe wall and compression of the fluid. The surge tank can handle the positive and negative pressure fluctuations. If there is any down surge then the surge tank would provide fluid to the system, and thus it would prevent the vapor column separation. Mostly a surge tank is used to reduce the distance between the free water surface and the turbine and thus the surge pressure can be reduced.

What are the major functions of a surge tank?

Where should be a surge tank located?

In order to obtain good result we must locate or install a surge tank in the proper place.

How does a surge tank work?

This tank would inject the water into the pipeline where the surge event causes low pressure and also it would allow water out of the pipeline if the surge event causes high pressure. These tanks are mostly a closed system, this tank doesn’t consume water. The water that is injected during the low-pressure events would be removed after the situation is changed. The water is removed during the high-pressure event after the pressure drop. Mostly the surge tanks are powered by air so that they can remove or add water very faster to counter the pressure changes.

What are the types of surge tank?

These tanks are the closed type with an open interface between the water at the bottom of the tank and air at the top of the tank. A compressor would supply the required air, if the required amount of air is pumped to the tank the pressure of the air and the water is equalized, some air will be absorbed into the water as it flows in and out of the tank. So we need to check and maintain the air volume and pressure. The compressor needs to be connected permanently to add air when needed.

This type of surge tank consists of an elastomeric bladder and this would separate the gas and the liquid. So if there is an increase in pressure during the valve operation or during the pump start-up the fluid will enter into the tank through the connecting pipe so when the fluid enters it compresses the trapped gas in the tank and the pipeline fluid energy is used to compress the gas volume until the pipeline stops. In case of the pipeline reversal, the surge tank would discharge the fluid and the gas expands and this could prevent the low pressure. This type of surge doesn’t need any maintenance and in this tank, the water and the air get absorbed and because of this there is no need for a compressor or control system to top it up and because of this, we don’t inject air into the pipe.

These tanks are pressure vessels and they will be filled with operating fluid partially and it also has a gas blanket to discharge the fluid if the pipeline pressure decreases. If the pressure in the pipeline increases then the tank would accept the fluid by compressing the gas trapped within the tank. In order to keep the proper level, these tanks have a proper supply of gas and some have a level control system in order to automatically maintain the correct gas to liquid ratio. Due to the absorption of gas into the liquid, the gas must constantly be replenished on this type of system and an air compressor is used to keep the tank operational. The operation of the hydro-pneumatic surge tank is similar to that of the Bladder surge tank in order to control the pressure surges.

A simple surge tank is like a vertical pipe and it will be connected between the penstock and the turbine generator. This tank has good height and there are supports to hold the tank. If the water is increased quickly then the water will be collected in the tank and the pressure will be neutralized. The surge tank top is opened to the atmosphere so in case if the water level rises beyond the surge tank then it will overflow, and by this, the pressure can be maintained.

This type of surge tank consists of an orifice between the pipeline and the surge tank. This surge tank is also called a throttle surge tank because its orifice is also called a throttle. This orifice has a very small diameter. In case if there is any overflow it would enter into the surge tank through this orifice. Due to the small diameter, functional losses will be developed and excess pressure in the main pipeline is destroyed. In order to reduce the water hammer effect, the diameter of the orifice should be well designed for the full rejection of the load by the turbines. The orifice would restrict the flow into or out of the tank, so if the orifice area is more the tank would act as a simple tank and if the orifice area is less then it would act as there is no surge tank. The restrictive property of the orifice would not allow the water surge to be affected on the tank completely some of it will be transmitted into the tunnel.

This surge tank has a cylinder tank with a riser in it and it has a very small diameter and through this, the water would enter into the riser during the overflow. The riser has annular ports at its lower end, and these ports would help into or out of the tank and the water storage is done by the outer tank and due to this, it is called a differential surge tank.

This type of surge tank has extra storage or storage galleries and these extra galleries are called expansion chambers. So this surge tank is also known as an expansion-type surge tank. The expansion chambers can be seen below and above the surge levels. The chamber which is below would store excess water in it and would release it if there is a drop in pressure. The chamber that is above would allow water in it if there is excess pressure.

How to select a surge tank?

What are the applications of surge tank?

What is a pressure surge in a pipeline and how to do the surge analysis?

What is a deluge valve and what is the need for a deluge system?

What is Safety instrumentation system?