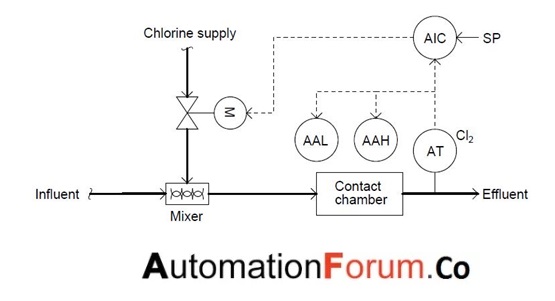 Another type of instrument commonly seen in measurement and control systems is the process switch. The purpose of a switch is to turn on and off with varying process conditions. Usually, switches are used to activate alarms to alert human operators to take special action. In other situations, switches are directly used as control devices.

The following P&ID of a compressed air control system shows both uses of process switches:

All three switches in this air compressor control system are directly actuated by the air pressure in the vessel. In other words these are process-sensing switches. It is possible to build switch devices that interpret standardized instrumentation signals such as 3 to 15 PSI (pneumatic) or 4 to 20 milliamps (analog electronic), which allows us to build on/off control systems and alarms for any type of process variable we can measure with a transmitter.

For example, the chlorine wastewater disinfection system shown earlier may be equipped with a couple of alarm switches to alert an operator if the chlorine concentration ever exceeds predetermined high or low limits:

The labels “AAL” and “AAH” refer to analytical alarm low and analytical alarm high, respectively. Since both alarms work off the 4 to 20 milliamp electronic signal output by the chlorine analytical transmitter (AT) rather than directly sensing the process, their construction is greatly simplified. If these were process-sensing switches, each one would have to be equipped with the capability of directly sensing chlorine concentration. In other words, each switch would have to be its own chlorine concentration analyzer, with all the inherent complexity of such a device!

An example of such an alarm module (operating off a 4-20 mA current signal) is the Moore Industries model SPA (“Site Programmable Alarm”), shown here:

Like all current-operated alarm modules, the Moore Industries SPA may be configured to “trip” electrical contacts when the current signal reaches a variety of different programmed thresholds. Some of the alarm types provided by this unit include high process, low process, out-of-range, and high rate-of-change.

Process alarm switches may be used to trigger a special type of indicator device known as an annunciator. An annunciator is an array of indicator lights and associated circuitry designed to secure a human operator’s attention1 by blinking and sounding an audible buzzer when a process switch actuates into an abnormal state. The alarm state may be then “acknowledged” by an operator pushing a button, causing the alarm light to remain on (solid) rather than blink, and silencing the buzzer. The indicator light does not turn off until the actual alarm condition (the process switch) has returned to its regular state.

This photograph shows an annunciator located on a control panel for a large engine-driven pump. Each white plastic square with writing on it is a translucent pane covering a small light bulb. When an alarm condition occurs, the respective light bulb flashes, causing the translucent white plastic to glow, highlighting to the operator which alarm is active:

Note the two pushbutton switches below labeled “Test” and “Acknowledge.” Pressing the “Acknowledge” button will silence the audible buzzer and also turn any blinking alarm light into a steady (solid) alarm light until the alarm condition clears, at which time the light turns off completely. Pressing the “Test” button turns all alarm lights on, to ensure all light bulbs are still functional.

Opening the front panel of this annunciator reveals modular relay units controlling the blinking and acknowledgment latch functions, one for each alarm light:

This modular design allows each alarm channel to be serviced without necessarily interrupting the function of all others in the annunciator panel.

Panel-mounted annunciators are becoming a thing of the past, as computer-based alarm displays replace them with advanced capabilities such as time logging, first-event recording, and multiple layers of ackowledgement/access. Time logging is of particular importance in the process industries, as the sequence of events is often extremely important in investigations following an abnormal operating condition. Knowing what went wrong, in what order is much more informative than simply knowing which alarms have tripped.

What is SAMA diagram?