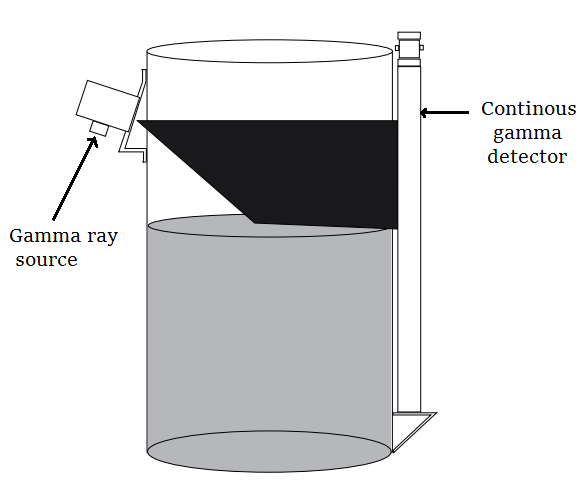 The radiation/nuclear level measurement technique is used to measure the level of fluid or solid in a closed tank using Gamma rays. Gamma radiation sources are chosen for use in level detecting equipment because gamma rays have great penetrating power and cannot be deflected.

Level measurement with radiation works on the principle of passing gamma radiation through the material to be measured. As the radiation passes through this material, the level can be determined by the amount of attenuation. The wave attenuates when it passes through materials.

There are strip source and point source:

The stripped source is more accurate as it radiates a long, narrow, uniform beam in the direction of the detector. As the level changes, the detector is covered and protected from the source and the corresponding response changes. The response is uniform and linear over the entire span, producing a linear signal that corresponds with changes in level.

The detector for continuous measurement is a type of scintillation counter and photomultiplier. This type of sensing has the advantage of the high sensitivity of the scintillation crystals (compared to Geiger counters) coupled with the safety and economy of a point source.

To improve linearity and accuracy, we use multiple point sources: