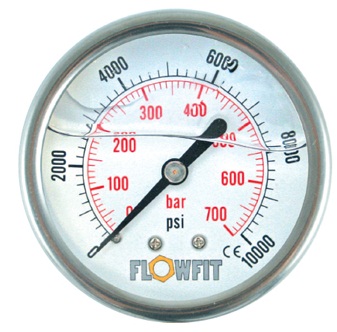 A simple way to mitigate the effects of pulsation on a manometer is to fill the inside of the manometer with a viscous liquid such as glycerin or oil. The inherent friction of this filling fluid has a “shock absorber” quality that dampens the oscillating movement of the measuring mechanism and helps protect against damage from pulsations or external vibration. However, this method is not effective for large amplitude pulsations. You can see a pressure gauge filled with oil in the next picture. Note the air bubble near the top of the screen, which is the only visual indication of an oil fill:

A more sophisticated method for damping pulsations seen by a pressure instrument is called a snubber, Used for dampening and filtering, the snubber has a metal disc available in four grades of porosity  Due to the large
filter area, the snubber has less tendency to clog than orifice-type devices. All-metal construction permits the snubber to be washed in a variety of common solvents

and it consists of a fluid restriction placed between with the pressure sensor and the process. The simplest example of a snubber is a simple needle valve (an adjustable valve designed for low flow rates) placed in a mid-open position, restricting fluid flow in and out of a pressure gauge:

One possible problem with the needle valve solution is that the small orifice inside the valve can eventually become plugged with debris or deposits of dirty process fluid. This, of course, would be bad because if that valve were ever plugged, the pressure instrument would stop responding to any change in process pressure or maybe it would simply become too slow to respond to major changes.

One solution to this problem is to fill the pressure sensor mechanism with a clean liquid (called a fill fluid), then transfer pressure from the process fluid to the fill fluid (and then to the pressure sensing element) using a loose diaphragm or something else membrane:

In order for the filling fluid and the isolation diaphragm to work effectively, there can be no gas bubbles in the filling fluid; it must be a “solid” hydraulic system from the diaphragm to the detection element. The presence of gas bubbles means that the filling fluid is compressible, which means that the insulating diaphragm may have to move more than necessary to transfer the pressure to the sensing element of the instrument. This will introduce pressure measurement errors if the insulating diaphragm starts to tense due to excessive movement (and therefore precludes part of the process fluid pressure from completely transferring to the fill fluid) or hits a “stop” point “where it can not move further (preventing any additional transfer of process fluid pressure to fill the fluid) 2. For this reason, insulating diaphragm systems for pressure instruments are generally” packaged “with filling fluid at the point and moment of manufacture, and then they are sealed in such a way that they can not be opened for any kind of maintenance. Consequently, any leakage of filler fluid in a system so ruins it immediately.

Threads onto a pressure gauge socket and provides restriction by means of a moving pin, which may be placed in either of five different sized holes, and this allows the user to vary the amount of dampening to suit requirements. The pulsating pressure moves the pin up and down, providing a self-cleaning action. Dampeners are shipped with a pin in the “middle” hole, and may be used in either a vertical or horizontal position. Maximum pressure is 5000 psi.

The most economical method to dampen pulsation and pressure spikes is with a throttle screw or throttle plug.
Threaded or pressed into an instrument socket, the throttle screw orifice selected is based on the viscosity of the pressure fluid, rapidity of pressure fluctuations, and the amount of dampening effect desired. A smaller orifice should be used for low viscosities, high frequencies, high pressure and reduced pointer amplitude

Used when live steam is present in the process, a siphon filled with water should be installed between the pressure gauge and the process line. If freezing of the condensate in the loop of a siphon may occur, a diaphragm seal should be used to isolate the gauge from the process steam. Also use siphons whenever condensing hot vapors (not just steam) are present.

What are capillary lines? and what is it used for?

What are the types of industrial sensors used in the Process Industry?