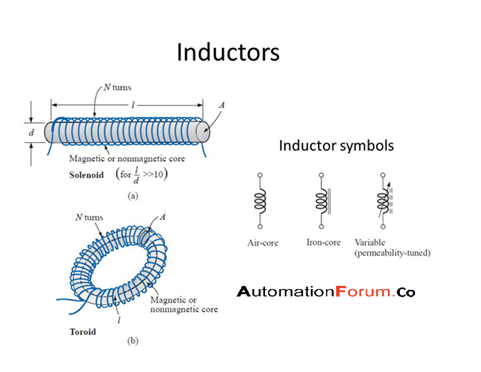 What is inductor? and it’s unit

What is the difference between the inductor and inductance

Inductance is the property of an electrical device to resist the change in the flow of current. It is the process of inducing an EMF only when there is a change in current occurs. Inductors are devices that can create inductance they are a passive device that has two –terminals.

How does an inductor charge or discharge

If the current through the inductor increases, it drops the voltage opposing the direction of electron flow and acts as a power load. This can be considered as the charging of the inductor and it is because an increasing amount of energy is being stored in its magnetic field. The voltage will drop in case if the current through the inductor decreases and the voltage drop will help the direction of electron flow acting as a power source. This process can be called as the discharging of the inductor because the stored energy is decreasing as the energy is released from its magnetic field

What are the properties of an inductor

How does an inductor work

What are the types of inductors

In air-core inductors it does not use a magnetic core made of ferromagnetic material instead of that it uses the coil which is wounded on plastic, ceramic or other non-magnetic forms or those which have only air inside the windings. An advantage of air-core coil-over ferromagnetic core coil is that air core coil doesn’t have any core loss or energy loss and because of this feature, they are used in high frequencies. The major disadvantage of an air-core coil is that the coil is not rigidly supported and mechanical vibration in the winding can cause vibration in the inductance. The inductance is not affected by the current it carries.

This type of inductor is referred to as a ferromagnetic material. They exhibit magnetic property they consist of mixed metal elements of iron and other elements of crystalline structures. Ferrite core inductor has non-conductive ceramic material for higher frequency applications. Ferrite core inductors have low resistance with high inductance they can be used for high frequencies.

As the name indicates this inductor consists of many layers by adding an additional layer of coiled wire that is wounded around a center core of inductor gives multi-layer inductor. Generally, for more turns more inductance will be there. In this type of inductor, not only the inductance increase but also the capacitance between the wires increase the main advantage of this inductor is by giving lower operating frequency we will get higher inductance.

These inductors are of small size, very lightweight. It is a doughnut-shaped ferrite core that reduces radiated electromagnetic interference. Because of their symmetrical structure, there will only be less magnetic flux escape outside the core. The core is created in a closed magnetic field to get a higher magnetic field and inductance.

The inductors which are set inside a plastic or ceramic core is called as molded inductors. These inductors are in the shape of a cylinder or bar.

Low-frequency inductors are made with laminated cores to prevent eddy currents the core will be made up of stacks of thin steel sheets or laminations which are parallel to the field, with an insulating coating on the surface. Lamination will help to reduce resistance loss.

These types of inductors can share a magnetic path and can influence each other. These inductors are used as transformers to step-up or step-down voltage, and they are also used to provide isolated feedback and in applications were mutual inductance is needed.

They are available in a wide variety of power levels from inductors which can handle a few amps to hundred amps. Power inductors are subjected to a large amount of current and because of this, they can create a large magnetic field. Magnetically shielded inductors are used to prevent these magnetic fields from inducing noise in other parts of the circuit.

What are the applications of inductors