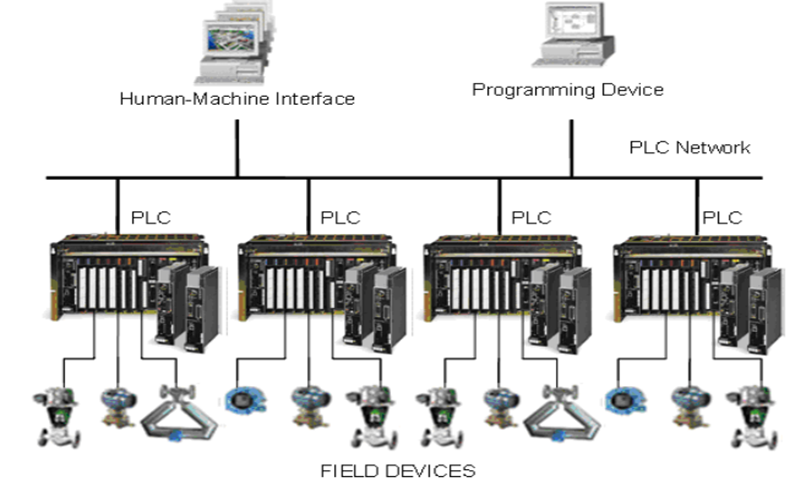 A PLC is a digitally operated device that would utilize programmable memory to store the instructions internally, by executing certain functions such as timing, counting, arithmetic, and logic sequencing. These functions are executed to control various kinds of machines or processes. So it can be used to control the equipment in an industrial process.

What is the hot standby in PLC?

The major components of the PLC are the input interface, memory section, CPU, programming tool, and also a programming language. So the PLC would check the input with the help of Input modules and the CPU would process the logic and then the output will be given to the output module. CPU is the major part of the PLC it consists of a microprocessor, memory, and also the power supply.

In earlier days there was only a single CPU in a PLC, so if we are using this PLC to control a process, then the process would be entirely dependent on this single CPU. In case there is any failure in the CPU then it could affect the operation of the whole process. In case there is a power failure then it can also affect the CPU, CPU also has communication ports to other peripherals. So in order to achieve the continuity of the process hot standby feature is introduced to the PLC. In PLC hot standby means a backup CPU is used, so there will be two CPUs sharing the same I/O.

How can a Hot standby PLC improve the plant operation?

What is the difference between a redundant PLC and hot standby PLC?

A redundant PLC means there would be two PLCs to control a process, while the hot standby PLCs would have two CPU’s primary and the backup CPU. The redundant PLC would have different signal paths from input to output due to the individual PLCs, in the case of the hot standby PLC the input has two paths one is to the primary CPU and the other one is for the backup CPU.

What is a duplex PLC system?

The duplex PLC system is created to increase the reliability of the PLC system.  In this PLC system, there would be double CPU units. So if one CPU shuts down then the other one would function and thus there won’t be any process interruption. So the two CPUs would simultaneously perform the calculations. In this system, the two CPU units would be synchronized so that a smooth transition can occur between them.

What are the major applications of hot standby PLC?

What are the advantages of Hot standby PLC?

What is, IoT and IIoT and how does it work?