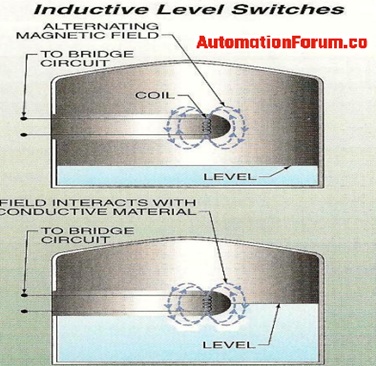 We can use the inductive level sensors for liquid metals that are capable to conduct electricity. So it is capable to detect the level of conductive liquids and solids and also it can be used to determine the interface between the conductive and non-conductive liquids. In order to use this level measuring device the container or tank that contains the process liquid must be non-magnetic. These are a non-contact type of level detectors, so there won’t be any mechanical problems. This type of level sensor is suitable for dirty environments and also it is not affected by the build-up of contaminants.

In this type, an inductive probe provides a point level measurement of a conductive solution by using a sealed probe containing an electrical coil attached to a bridge circuit. An electrical source would generate an alternating magnetic field, and circuitry to detect the changes in inductance.

The sealed probe will be inserted into a vessel and it would have a conductive solution. So when the level increases and the solution makes contact with the probe, the magnetic field of the probe would interact with the conductive material and it is detected by measuring the inductive resistance. An inductive level switch would use a bridge circuit to reassure the changing inductance to determine when the level of material in a tank reaches the level of the switch. There would be an electronic circuit that can detect the changes in inductive reactance during the interaction of the magnetic field with the conductive liquids. This device can be used in extreme environmental conditions due to the completely sealed probe and also it doesn’t have any moving part.

So in this type, a coil will be wound around a tube that would have liquid, the coil inductance would change quickly when the liquid moves and reaches the coil. In another type, a transducer is introduced by a transformer with a primary coil wound on one limb of a twin limbed iron core. It’s another limb is covered by a tube that has the liquid and it is also a part of the secondary winding, the resistance of this turn will decrease if the liquid column in the tube increases so basically they are inversely proportional. By checking the primary coil’s power usage we can determine the height variation.

What are the advantages of inductive level measurement?

What is an ultrasonic level sensor?

What is a blow-down valve?

What are the electrical methods of level measurement?