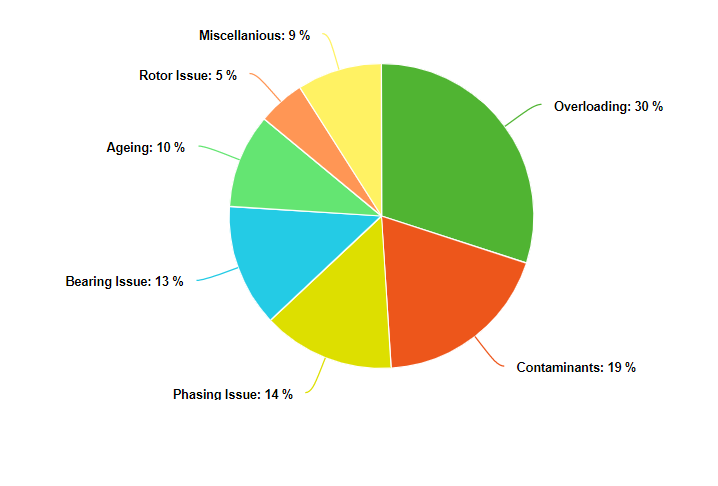 Due to the wide use of electrical motors, any fault in the motors in the industry affects the entire operation of the plants. A failure in the motors may lead to sudden unavailability, production stops financial losses and also lost money for the repairing.

Various causes of electric motor failure and their remedies

An excessive current flow within the motor windings causes electrical overload or over-current, which exceeds the design current that the motor can safely and efficiently carry. A low supply voltage can cause this, causing the motor to draw additional current in an attempt to maintain torque. Short circuited conductors or an excessive voltage source might also cause it.

Low resistance is the most prevalent cause of motor failure, and possibly the most difficult to overcome. The insulation of the windings degrades owing to situations such as overheating, corrosion, or physical damage, resulting in low resistance. This results in a lack of isolation between the conductors or motor windings, which can lead to leaks and short circuits, as well as motor failure.

Remedy for Low Resistance: Insulation should be evaluated for symptoms of deterioration on a regular basis and replaced before low resistance causes failure.

Factors to increase the overheat of the motors are:

Remedy for Over-Heating: The motor must be kept as cool as possible, and keeping the operating environment as cool as feasible can assist avoid problems.

The unbalance that develops when electricity lines are out of phase is known as phase unbalance. When one load is applied to a three-phase system, phase unbalance occurs, causing one or both lines to carry more or less of the load.

During installation, the electricians balance loads of three power systems. However, as more than 1 load is introduced to the system, the system becomes unbalanced. As a result of the imbalance, the three lines have moved out of phase and are no longer 120 degrees apart electrically.

Three-phase electric motors run at temperatures higher than their indicated ratings due to phase imbalance. The temperature rises in direct proportion to the phase mismatch. These high temperatures cause the insulation to break down, as well as other issues.

Remedy for Phase Unbalance: A three-phase monitor relay, also known as a phase failure relay, is a low-cost and simple-to-install solution for preventing costly damage to your motors and equipment caused by phase unbalance.

One of the most common reasons for motor failure is contamination from dust, grime, and chemicals. Foreign objects that get inside the motor can dent the bearing raceways and balls, causing excessive vibration and wear. It may also disable the cooling fan, reducing the motor’s ability to regulate temperature and raising the risk of overheating.

Remedy for Contamination: Contamination is relatively simple to avoid. To assist prevent the likelihood of contamination entering the motor, keep work locations, equipment, and fixtures as clean as possible. Also, when setting up your workstation, keep motors away from grinding machines that produce a lot of pollutants.

Vibration can cause a variety of problems with the motor, and it can even cause it to fail prematurely. When the motor is placed on an uneven or unstable surface, vibration occurs. Vibration, on the other hand, might be caused by an underlying problem with the motor, such as loose bearings, misalignment, or corrosion.

Remedy for Vibration: Ensure that the motor is mounted on a level, sturdy surface to reduce vibration. Check for indicators of wear, as well as loose bearings or misalignment, if vibration persists. If you can’t figure out what’s causing the vibrations, consult a professional.

The voltage unbalances that happen when the voltages at the electric motor terminals are not equal are known as voltage unbalance. This voltage imbalance might range from a few millivolts to a complete loss of voltage on one power line.

One winding will overheat if the voltage is not balanced, causing thermal degradation of the winding insulation. A current unbalance is caused by a voltage imbalance.

Voltage unbalance should be verified on a regular basis and during all service calls. Complete the following steps if you discover a voltage imbalance of more than 2%:

The process of frequently turning an electric motor on and off is known as over cycling. The starting current of an electric motor is normally five to six times the motor’s full-load running current. The majority of motors aren’t built to start more than ten times each hour.

When an electric motor reaches operating temperature and continues to cycle on and off, this is known as over cycling. The temperature of the motor will rise even higher, damaging the motor insulation.

Remedy for Over cycling: Check motor manufacturer user guidelines to find the number of on and off allowed within a specified period and follow the guidelines while starting and stopping the motor to avoid over cycling issues. Even starting and stopping beyond a number of counts within a specified period can be restricted through some logic using PLC/DCS.

1) Motors fail to start after installation

Feel for rubbing as you rotate the motor shaft.

2) The motor has been running for some time, but now it’s not working.

Reset the breaker or replace the fuse.

Examine the coils for any leakage. Replace the motor or repair if any leaks are found.

The capacitor should be checked.

3) The motor continues to run but eventually shuts off.

If the voltage is less than 90% of the motor’s rated voltage, call your utility company or double-check that another piece of equipment isn’t stealing power from the motor.

Check to see whether the load has changed or if the equipment has tightened. Make sure the airflow hasn’t stopped if you are using the fan for cooling.

4) The Motor Is Turning the Wrong Way

Replace the motor’s wiring according to the schematic that came with it.

Make sure the load isn’t stuck. Remove the load from the motor and check the amp draw of the motor when it is not in use. It should be less than the nameplate’s maximum load rating.

Check to see if the motor is getting enough air to cool properly. The majority of motors are designed to operate at temperatures of 40°C or less.

Check the motor load and make sure the drive belt tension isn’t excessively tight. The bearings will also break if the load is uneven.

A different type of bearing grease may be necessary if the motor is utilized in an environment with high ambient temperatures. It’s possible that you’ll need to speak with the factory.

Examine and compare the actual motor loads to the rated load capacity of the motor.

Install a surge protector if this is a common problem.

Selection of Flowmeters based on fluids in the Sugar Industry

How do Boiler accessories help in increasing Boiler efficiency?