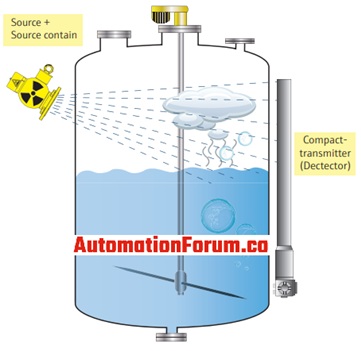 What are the types of solid level detectors?

This device has two components, and they are a radioactive source and a detector, the radioactive source is very small and it is mounted in a lead-filled source container that has a small lens or opening to direct the gamma radiation in one direction. This gamma energy could be blocked or absorbed by anything between it and the detector. The working principle of this device is based on the principle of the amount of gamma radiation from a fixed source transmitted to the detector and this radiation would vary with the thickness of solids between the source and detector. This device can be used for high temperature and pressure applications. This type of level measurement needs a gamma source, a detector, and a microprocessor.

The gamma source will be installed externally in the vessel and it will emit the energy through the vessel walls and this emission of the energy will be directed towards the detector and it will be mounted on the opposite side of the vessel. So when the process level increases in the vessel then the gamma energy that is received by the detector will decrease. So according to the rise of the process level the energy that reaches the detector will be decreased. So this device can measure the increase in level by determining the reduction in received energy by the detector. The detector will measure the energy level and it would send a proportional signal to the microprocessor. The advantages of the gamma-ray absorption method are, they have no physical contact with the liquid and they can be used for molten metals and also for all kinds of liquids. The disadvantage is that it is affected by the density change of the liquid.

This type of level sensor is very old and it is used for bulk and solid point level measurement. This device consists of a motor that would rotate a paddle wheel. When the solid materials come in contact with the paddle then the motor will be rotated on its shaft by its own torque and it will go on till the flange that is mounted on the motor makes a contact with a mechanical switch. This device is used to check the presence of solids in a process tank. The advantage of this device is that the paddlewheel is cheap and reliable. The disadvantage of the paddle wheel is that it is affected by shock vibration and damage. Paddlewheels are commonly used to measure the level of granular solids in pneumatic conveying equipment and in bins and tanks for silo collection and storage.

Another type of solid level measuring is a weighing sensing system and it uses a cable or tape which is attached to the weight to measure the level. This weight is then descended into the tank and its motion is controlled by a timer. So when the weight makes contact with the material surface the motor would reverse the direction and retrieves the weight. While the descent, pulses are generated and it will be displayed on a counting unit that would indicate the material stored or the filling capacity. Weighing type level sensor can operate under high pressure and temperature, this device is very accurate.

The operating principle of a diaphragm level detector is very simple it detects the level, of the fluid by the force exerts by the fluid on the diaphragm. The diaphragm box consists of an air-filled diaphragm and it would be connected to a pressure detector by the air tubing. So when the process fluid level increases above the diaphragm, the liquid head pressure compresses the captive air inside. There will be a differential pressure element that would sense the air pressure and it will be displayed as level. We can do the point level measurement with this type of level sensor. This device is very suitable to detect the level at one point, so one unit is needed to do the level measurement at one point. So two units are needed to detect both high and low levels. If we need to detect intermediate levels then we would need more units. This device is reliable and can maintain easily, the accuracy will be affected by the change in specific gravity.

This type of level sensor is designed to measure the level of hot catalyst at high temperatures. This device can only do fixed point measurement and it has a rapid response. This device has a balanced paddle which will be extended to a vessel via a diaphragm seal and the pneumatic balance transmitter would balance this. When the solid makes contact with the paddle by reaching the level of the paddle, then the balance is disturbed and the arm in the pneumatic balance transmitter is unbalanced, and it is indicated by an indicator attached to the transmitter.

What is a magnetic level indicator?