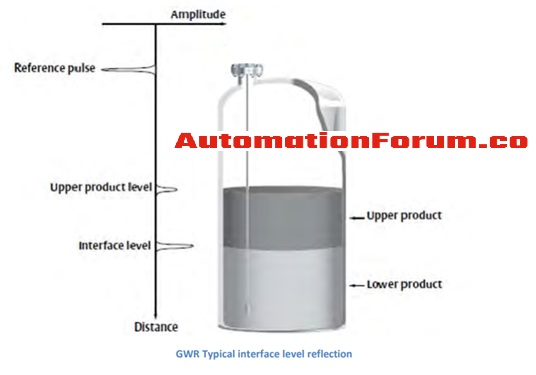 A guided wave radar sensor is a type of radar level sensor there are two types of radar level sensors they are through the air and guided type. This device can be used to measure the liquid level and it can also be used to do the liquid-liquid interface level measurement and this can be done for both process and ESD applications. GWR working is based on the principle of time-domain reflectometry.

So the level is measured by providing low-power nanosecond pulses and these pulses are guided along with the probe which is submerged in the process media. So when the pulse reaches the surface of the material it is measuring, then a part of the energy is reflected back to the transmitter and this time difference is taken to do the level measurement. So there is a time gap between these pulses which are the generated and reflected pulses and this time gap is converted to a distance and the level is calculated. The speed of the travel of the pulse would have an impact on the dielectric of the medium.

How do a guided wave radar transmitter operates?

The operation of the guided wave radar is based on TDR technology and it is based on a pulse of electromagnetic energy that is transmitted down the probe tube. So when the radar pulse reaches the liquid surface which has a higher dielectric constant than air in the process tank then the pulse will be reflected back to the electronic unit. There is a high-speed electronic timing circuit that can calculate the transit time and also measure the liquid level in the tank. It can accurately measure the level of the liquid.

How to select a guided wave radar transmitter for our application?

What are the advantages of GWR transmitter?

The measuring signal and reflection are concentrated around the waveguide or inside the waveguide. There won’t be any impact of stray signals because of the narrow path of the signal propagation. The signal concentration on the waveguide would result in a cleaner stronger signal of the echo reflection.

What are the limitations of guided wave radar?

What are the application of guided wave radar?

What is the difference between UPS and inverter?