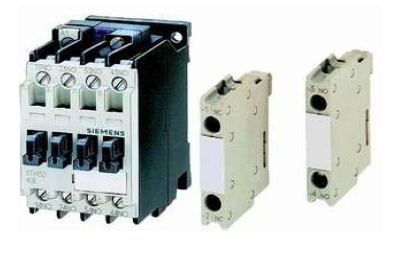 The contactor is an electrical component that serves to connect or disconnect AC power. Contactor or often also called the relay contactor we can find on the electric control panel.

In electrical panels, the contactor is often used as a selector or transfer switch and interlock on the ATS system. Here is a form of contactor that we can meet.

The working principle of a contactor is like a relay, in a contactor there are several electromagnetic-controlled switches.

In a contactor there are several switches with type NO (Normaly Open) and NC (Normaly Close) and a coil or electromagnetic coil to control the switch.

If the electromagnetic coil of the contactor is given an AC voltage source, the switch on the contactor will be connected, or change its condition, the original FF becomes ON and vice versa which initially ON becomes OFF.

To understand the working principle of a contactor can be seen from the following contactor scheme image:

NO type contactor switches generally have a capacity to flow larger than the NC contactor type switch.

Contactors that are circulating in the market are generally differentiated based on their ability to control AC voltage.

In the market contactor can be divided into 2 types, namely: