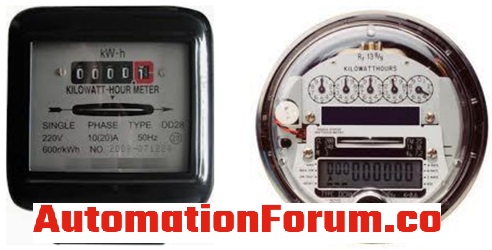 The energy meter is a measuring device that can be used to measure the quantity of electricity or energy according to a period of time. This measurement can also be described as the total electrical energy consumed for a certain time period. The electrical equipment works by consuming electric power and so this meter would measure the electrical energy used by the instruments in a home or in an industry for a period of time. The energy meters are used in domestic and also in industrial applications. The Kilowatt-hour meter is widely used, it is the major electric meter that can be seen in many places and its measurement will be in kilowatt-hour.

What are the major functions of an energy meter?

Energy can be explained as a product of power and time

What is the difference between energy meter and watt-hour meter?

Both of these meters would measure the electrical power consumption. The watt-hour meter would indicate the value at a certain instant when the reading is done. The energy meter has recording or registration ability so it can combine all the instantaneous readings of power over a period of time.

What are the required characteristics of the energy meter?

What are the factors that must be considered while selecting an energy meter?

How does an energy meter work?

This section consists of an aluminum disc and it would be mounted on a spindle. The aluminum disc is placed between the two magnets and the disc would rotate continuously due to the deflecting torque.

This system is for the continuous recording of the number on a dial and this number will be proportional to the revolution of the disc. The disc revolution number is the amount of electrical energy that passes through the meter.

What is an electronic energy meter and how does it work?

The electronic meter doesn’t have any moving parts and because of it, these meters are called static energy meters. This meter is controlled by an integrated circuit and the IC which is used for this purpose is ASIC. The IC which is used in this meter is application specified integrated circuit. The electronic energy meter is composed of a voltage converter, current converter, multiplier, counter, etc. The sampling of the current and voltage will be done by the current and voltage transformer. The meter would use a reference voltage to compare it with the input voltage after that the voltage value will be transferred to the output section. The AD converters would convert this output to digital format.

What are the advantages of electronic meters over electromechanical meters?

How to improve the performance of the energy meter?

What is an instrument transformer?

What is a Stepper Motor?