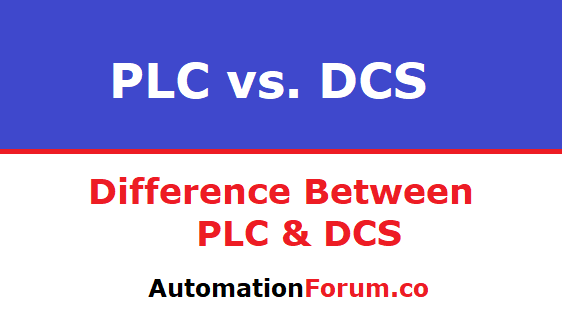 PLC is electronic systems that operate digitally and are designed for use in industrial environments, where the system uses programmable memory for internal storage instructions that implement specific functions such as logic, sequences, timing, enumeration and arithmetic operations to control machines

A Distributed Control System (DCS) usually refers to a control system of a manufacturing system, process or any type of dynamic system in which the controller elements are not centrally located (such as the brain) but are distributed throughout the system with one or more controllers controlling each component sub-system.

Majority of process plant has both the PLC & DCS. PLC employs as the subsystem of DCS.

DCS is designed to configure and PLC to program.

DCS configuration utilizes conventional control items which are automatically connected to the corresponding faceplate, simplifying setup and resulting in standardization.

DCSs have extremely sophisticated and embedded Foundation Fieldbus and HART interfaces as well as appropriate interfaces to other networks of industrial automation.

PLC systems tend to have fewer sophisticated Foundation Fieldbus and HART interfaces. In many instances, they depend on hardware and software from third parties with more intensive setup.

Interestingly, discrete network interfaces can pose a problem with PLC systems, as there are many standards and bigger suppliers optimize the interface and software setup to their flagship protocols.

Typically, DCS backbone networks are conventional Ethernet hardware, but they use their own closed, high-performance protocols and support redundancy natively.

Value of the product being manufactured:

The PLC is the probable option if the price of each autonomous item being produced is comparatively small and/or downtime results in loss of manufacturing, but with little extra expense or harm to the process.

The choice should be DCS if the price of a batch is large, either in the price of raw material or market value, and downtime outcomes not only in lost production but possibly hazardous and harmful circumstances.

The PLC has been designed to satisfy the requirements of high-speed apps requiring scanning rates of 10 milliseconds or less, including movement control, high-speed interlocking, or motor and drive control activities.

Most of the time, the DCS doesn’t have to be that fast. The regulatory control loops usually scan within the range of 100 to 500 milliseconds. In some instances, executing control logic any quicker could be harmful–potentially causing excessive wear on final control components such as valves, leading to early maintenance and process problems.

What is safety valve?

What is Damping in instrumentation?

What is SIS? Difference between SIS and ESD