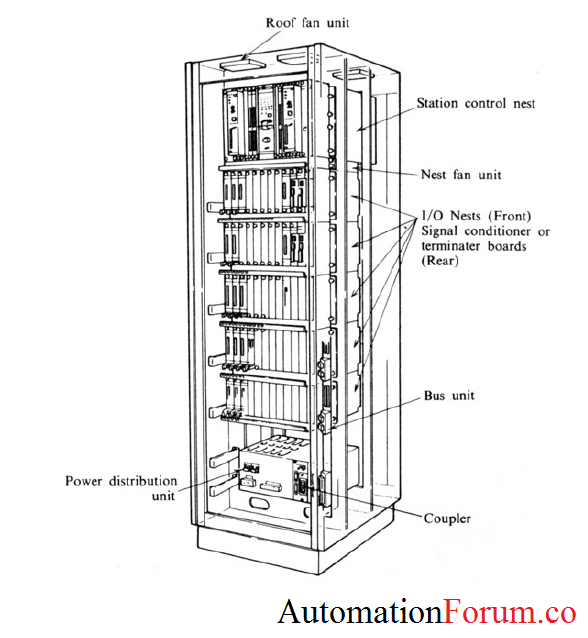 DCS refers to a control system usually of a manufacturing system, process or any kind of dynamic system. In DCS controllers are not central in location, but which are distributed throughout the system with each component sub-system controlled by one or more controllers.

The entire system is connected by a communication network to control and monitor the system.

The basic architecture of the distributed control system, as shown:

The control stations receive measurement signals from sensors such as for temperature, pressure, and flow rate, and perform control calculations in accordance with the deviations from the setpoint values. Output signals are then sent to the final control element to perform compensatory actions.

The man-machine interface is the interface between the distributed control system and the operator. It does central monitoring of the plant and permits the operator to perform operations. The operator console is composed of a powerful microprocessor, CRT, and keyboard. Many different operations can be carried out by switching displays on
the CRT.

The control sub-system interface connects the distributed control system to other types of instruments such as the PLC (programmable logic controller) or a composition analyzer to integrate plant operation.

Communication buses are used to communicate between HMI station and control interface. It permits system build-up and software maintenance in the distributed control system.

Configuration of the control station:

The control station consists mainly of a station control nest (SCN) and 1/0 nests. The SCN has a microprocessor and performs process control, communication control, and duplex control. The 1/0 nests contain interface cards for input and output. Signal conditioner nests and terminal boards can be installed in the rear of the cabinet, as necessary.

Analog signals such as 4 to 20 rnA DC from the field transmitters and thermocouple inputs are linearized and/or
normalized to 1 to 5 V DC by signal conditioner cards. The inputs are cabled into a group of 8 or 16 points to the 1/0 card. These signals are converted to digital values by the 1/0 cards.

The digital control output is converted to 4 to 20 rnA DC analog output signals and sent to valves and other such devices via signal conditioners.

Functions, advantages of DCS and How DCS works?

Function and Components of DCS